One of the poachers managed to flee back into the forest.

The officials seized 42 kilograms of a wild boar meat, a homemade gun and three motorcycles.

The two suspects said they came to poach wild boars during the night with a plan to sell the meat to restaurants at a price of Bt200 to Bt300 per kilo.

Police have seized the motorcycle of the poacher who fled and expect him to turn up at the station soon. 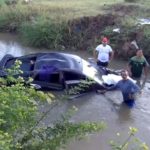