The “Beyond Khon Kaen City” and “Beyond Muang Lao City” applications were introduced at a press conference on Saturday as part of the “smart city” digital-platform programme. Khon Kaen Governor Somsak Changtrakul, and Laos Consul-General to Thailand Bounsy Vongbouasy showed off the new apps at the Khon Kaen International Conference Centre.

The two apps were developed by Beyond Isan Gateway company, which is developing an open-platform digital information gateway for Khon Kaen, Udon Thani, and Laos. That gateway would allow government agencies and private companies to access a common database. It would enable the government to better communicate information to users, and help integrate services at government agencies and private companies through a common database.

The provincial governor told the media that the digital-platform programme would help Khon Kaen become a smart city and a global city in the future. 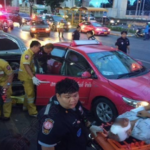