Seven people have been injured after the pickup truck they were traveling in crashed and flipped onto its rough in Mae Sai, Chiang Rai yesterday, June 20.

The accident occurred on Phaholyothin Road (Highway 1) in Tambon Pong Pha at around 5 p.m.

According to reports, the pickup truck has hit a traffic island a speed and has subsequently flipped onto its roof. There were no other vehicles involved but given the circumstances, police are investigating as to whether the driver may have been attempting to avoid hitting another vehicle.

Those injured including the driver, Mr. Thanakorn Pasapan, age 37, his wife (36) and two kids aged 9 and 5 who were visiting the north from Nakhon Si Thammarat along with three Chiang Rai locals who were traveling with the family.

Pictures from the accident suggest that at least some of those injured were traveling in the back of the pickup truck.

All seven were rushed to Mae Sai District Hospital with some described as being in a serious condition. 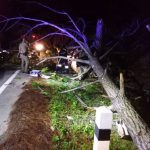