This cheeky mouse learned a lesson about stealing food – when its head became stuck in the rice steamer.

The pesky rodent scampered through one of the holes in the cooking device to reach a bag of dried rice inside.

But after poking through its head, the mouse became stuck and failed to find its way back out again.

Resident Casey Melendres went to the pantry to cook food and noticed the mouse’s legs wriggling around.

He said: ”This is what happens to you when you are trying to steal rice. The mouse deserved it.”

Casey said he found the incident amusing but took pity on the mouse and helped to release it from the steamer.

He added: ”I was definitely surprised when I saw the mouse like that. To be honest, it wasn’t east to release him because of the awkward position.” 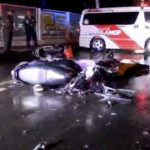