A rubber plantation owner, 64, suffering from multiple ailments, shot himself to death in his home in Trang’s Muang district on Wednesday morning, police said.

The Muang Trang police were alerted to the suicide of Pluem Chairat at 8:35am.

He was found with a gunshot wound on the left side of his head and a homemade sawn-off shotgun was found beside his body.

His daughter-in-law, Siyamol Chairat, 43, told police that Pluem was earlier a lively man but he later suffered from multiple ailments, including diabetes, hypertension and cancer. 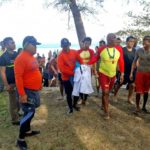 Body of missing boy washed up on Phuket beach