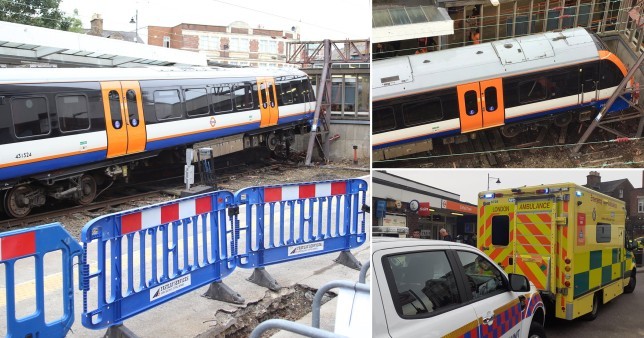 Two people are hurt after a train crashed through the barriers at a station in north London this morning.

Dramatic pictures show the train raised up at an angle and jutting over the tracks after it hit the buffers at Enfield station at around 8.15am.

Eyewitnesses said the train just stopped short of crashing into the station windows and veering onto the platform.

Around 50 people were evacuated from the train by the London Fire Brigade, who remain at the scene.

Two people were treated for minor injuries, but they were not taken to hospital.

Overground services have been suspended between Enfield Town and Edmonton Green for the rest of the day.

A recovery operation to make the scene safe is now underway.

One person tweeted: ‘Just been there & chaos at the door. Train arrived at Enfield Town & crashed into the buffers. Fortunately didn’t go through the station window.’

Another said: ‘In all my years of using Enfield Town for commuting nothing like this incident has occurred. Really, really hope everyone affected is ok. Thanks to the emergency services for being on the scene so fast.’

A third wrote: ‘Train crashed through barrier at #Enfield Town Station this morning. Just managed to stop short of platform. Emergency services out in force.’

The London Fire Brigade have released a detailed statement regarding their rescue operation.

A spokesman said: ‘Firefighters have been called to a derailed train at Enfield Town Railway Station this morning.

‘An eight carriage passenger train derailed after hitting buffers at the station.

‘Around 50 people were evacuated from the train before the Brigade arrived by TfL and station staff. Two people have been treated at the scene for minor injuries by London Ambulance Service crews.

‘The Brigade was called at 0827 and is still at the scene. Three fire engines and two fire rescue units are in attendance.’

Station Commander Jim O’Neill, who is at the scene, said: ‘The train has hit the buffers at the station, which is at the end of the line, and gone up over the top of them.

‘Firefighters carried out a systematic search of the train to ensure there were no further people on board.

‘Crews are now assisting station staff to make the scene safe and a recovery operation will then be carried out.’ 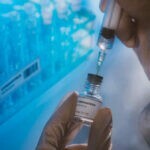 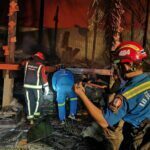 Phitsanulok temple up in flames