At about 9PM on Wednesday 3rd April, a blue Toyota Yaris was speeding through Soi Buakhao and hit a heavily pregnant Chinese lady 10 to 15 yards prior to colliding with a few motorbikes, then making its way up the steps next to Tree Town.

Doug Trowbridg, an onlooker on holiday from Ohio, USA has sent in a few images from the scene. Doug had asked a few people at the scene for some information, and relayed it back to PattayaToday.

I spoke to the owner. Now I’m sure. Thai female driver with falang passenger. She hit a Chinese pregnant woman and she is critically injured. No others seemed to be hurt except several parked motorbikes. According to Doug, a few of the Thai people he had spoken to have said they don’t think the Chinese lady will make it.

The woman was struck prior to going up the two concrete steps about 10 or 15 yards prior. We at Pattaya one sincerely hope the Chinese lady and her unborn child will pull through and be ok. This is a prime reminder to make sure you are always paying attention to the traffic, and where you’re walking.

The Origins of Pad Thai 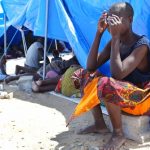