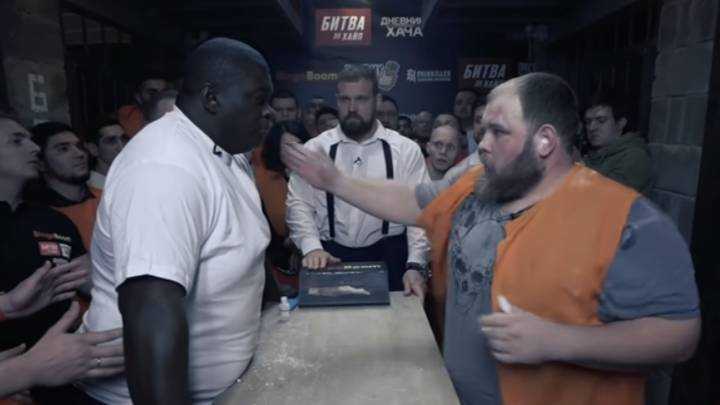 A 6ft 7 MMA beast has taken on a 300lb Russian star known as ‘The Dumpling’ in none other than… A slapping contest.

That’s right, the Russian Slapping Championships are not only a thing, they also pit some huge – literally – people against each other in what might be the most bizarre duel you’ll ever watch.

Vasily Khamotskiy is known in the slapping biz as a pretty big deal, having earned the nickname of ‘The Dumpling’ thanks to his stocky frame.

He won the inaugural Russian Slapping Championships at the Siberian Power Show back in March 2019, and earlier this month he returned to defend his title.

The Siberian farmer took on a Brazilian MMA star called Zuluzinho, who is so tall he can be seen towering over everyone in the room in footage from the big event.

For the fight – which RT reports had a prize total of 150,000 rubles ($2,000/£1,600) – the room had been set up to look like a prison, with extras dressed in orange jumpsuits to really drive that incarcerated feel home.

A montage from The Russian Slapping Championships gave fans a backstory for each slapper, playing on Khamotiskiy’s farming background by showing him driving a combine harvester through a field.

Zuluzinho, meanwhile, was given a slightly more baffling storyline, in which – just moments before the competition – he managed to escape being electrocuted for his apparent crimes, running away from his death sentence to do what he was born to do: slap Dumpling, obviously.

After winning the coin flip, Dumpling was awarded the first slap, and chalked his palm before laying one on his opponent.

His hand left an imprint on Zuluzinho’s face, but his opponent merely smiled through the pain before taking his turn – which was sadly disallowed as his hand pulled down on the ear, something that’s considered a foul.

Many, many slaps later, officials decided there was no clear winner in the fight, and a draw was declared.
An underwhelming result, maybe, but at least the two enemies could share the 150,000 rubles before hugging it out.

Sure, it may be one of the weirder sports out there, but with many of the world’s large-scale events like the Olympics and Wimbledon now cancelled due to coronavirus, we’ll take it. 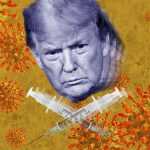 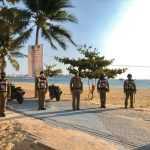