Home » Tourist seen applying his saliva all over BTS lift

Another Asian tourist’s reckless, caught-on-camera behaviour in the midst of the Covid-19 outbreak has Thais livid online.

A video circulating on social media of the man applying his saliva all over the walls and buttons of an elevator at a Bangkok Skytrain station drew intense criticism and demands for an arrest and forced testing.

He also repeatedly touching his groin area and pressed his hand against the button panel.

The incident, which occurred sometime after 5am on Friday (March 20), follows another in which a Chinese tourist was video-recorded spitting inside public transportation in the capital.

The BTS said a security officer at the National Stadium Station attempted to apprehend the offender from the lift but he managed to escape.

It said the lift was sanitised soon after the incident and guards at every station have been ordered to watch for unruly behaviour. 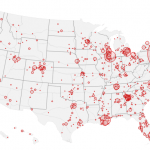 Live Updates: Coronavirus Pandemic Continues to Rage Across the World