Tourist police joined forces with other police agencies to search 104 locations around the country Wednesday night and arrested 37 foreigners, deputy tourist police chief Pol Maj Gen Surachet Hakpal said early Thursday.
Surachet held a press conference in RCA on Rama IX Road to announce the results of the 11th “X-ray Outlaw Foreigner” Operation.
Surachet said six were arrested for overstaying visa, broken down into one Swiss, one Senegalese, one Russian, one Indian, one Vietnamese, and one Ivory Coast citizen.
He said 27 others were arrested for unlawful entry into the kingdom and four others on other charges. BN – EP 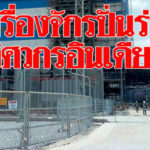