The Tourist Police Bureau announced the arrest Tuesday of a 39 year old Thai con artist and thief who posed as a cop to rob an Indian tourist near his hotel in Bang Plee, south east of Bangkok.
Indian national Thajudheen Poovancheeri had gone to the police at Suvarnabhumi Airport after he was robbed of cash, credit cards and an iPhone.
A Thai man dressed as a policeman had approached him opposite the Grand Inn Come Hotel and demanded to see his passport. He had then stolen his possessions.
The tourist police were soon on the case and after liaising with both Bang Kaew police and counterparts in Bang Na they soon had career criminal Sommat Bunyen in custody.
Taken into evidence was a fake uniform, the loot, a gun and ammunition and the vehicle that was used in pursuance of the crime.
Sommat admitted everything and had many previous offences of a similar nature against him.
Pol Maj Gen Surachet Hakpal – deputy commissioner of the TPB known as “Big Joke” in the media – was on hand at Bang Kaew police station on Tuesday when the victim thanked him with a presentation of flowers for the quick recovery of his property and arrest of the suspect. YP1 – EP 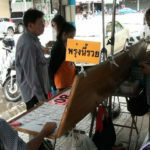 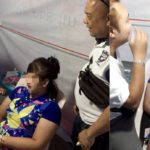