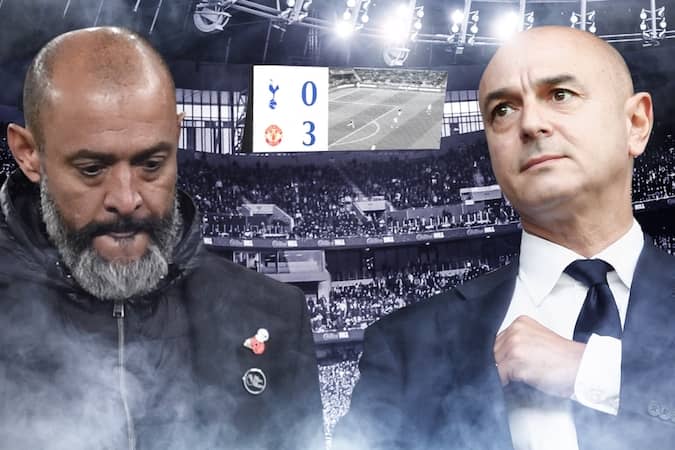 The defeat was Spurs’ seventh in all competitions so far this season, leaving Spurs on 15 points after ten matches played in the Premier League.

In a brief statement on the club’s website, Managing Director of football Fabio Paratici said: ‘I know how much Nuno and his coaching staff wanted to succeed and I regret that we have had to take this decision.

‘Nuno is a true gentleman and will always be welcome here. We should like to thank him and his coaching staff and wish them well for the future.’

Nuno built his reputation in England by getting Wolves promoted to the Premier League and he guided them to back-to-back 7th spot finishes in the top flight.

He left the Midlands club at the end of last season but he was a surprise choice to take charge at Spurs, particularly as the club had made it clear they wanted an attack-minded manager after sacking Jose Mourinho.

Spurs failed to have a shot on target against Manchester United on Saturday, meaning they’ve gone over 130 minutes without having one after their defeat to West Ham in the previous game.

Antonio Conte is the early favourite to take charge in north London but the Italian tends to be unwilling to take a new job midway through a season and will take some convincing to do so by Levy.

The Italian is available having left Inter Milan at the end of last season but he’s been heavily linked with replacing Ole Gunnar Solskjaer at Manchester United, should the Red Devils sack the Norwegian.

Mauricio Pochettino is another candidate for the role and the Argentine is said to be open to returning to England.

The 49-year-old was sacked by Levy in 2019 and replaced by Mourinho but the Spurs chairman is said to have privately admitted that the decision was a mistake.

The pair remain on good terms but hiring Pochettino would be difficult given his contract at Paris Saint-Germain. 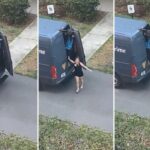 Prime time in the back of Amazon van (VIDEO) 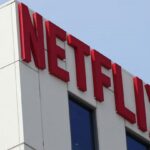