Home » Total smoking ban in condominiums in Thailand urged by majority of residents, according to Tobacco Research Center findings The Thai law should also designate the smoking prohibition in condominium buildings as they should become a total smoke-free area to reduce the effects of passive smoking, said Dr. Sasitorn Taptagaporn, Deputy Dean for Research and Academic Services at Public Health faculty, Thammasat University.

Dr. Sasitorn, who is also a member of the TRC, stated at a tobacco control seminar on Tuesday, November 24, that the non-smoking law currently bans only in public areas, including lobbies and corridors, but does not apply to the entire residential buildings and individual condominium units.

The seminar, hosted by the Thai Health Promotion Foundation, also discussed the findings of a Thammasat University study on smoking in condominium buildings conducted from September to October this year.

Although some enjoyed their cigarettes in their own room, 77 percent of surveyed residents said they could smell cigarette smoke even when they stay inside their own room, according to the university findings.

At the end of the survey, the majority of the respondents (89 percent) overwhelmingly agrees with a total smoking ban on condominiums and other residential areas.

“The findings reveal a good sign to promote powerful non-smoking campaigns in order to respect and protect the health rights of non-smokers. Condominium associations nationwide should agree on making smoke-free buildings. And hopefully in the future when the residential regulations are widely understood, the Thai government then would consider a national law and penalty to make condominiums truly smoke-free,” Dr. Sasitorn stated. 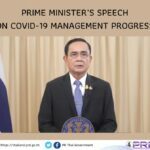 Thailand’s Direction for Living with the COVID-19 Pandemic