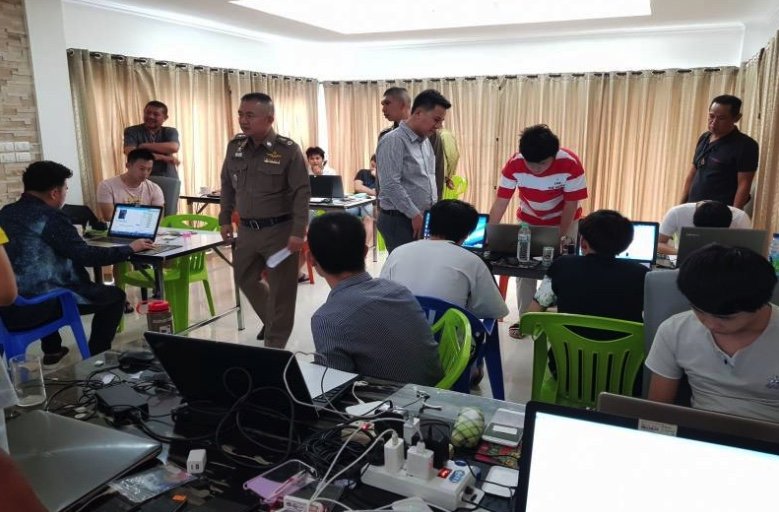 Daily News reported that top-level police and international crime suppression raid on a house in Pattaya resulted in the arrest of 12 Chinese men yesterday.

They had come into Thailand as tourists and were running an online scam supposedly selling goods to their country folk.

The raid was led by Chonburi provincial police chief Pol Maj-Gen Nanthachart Suphamongkhon along with the Nong Prue station chief and the head of Pattaya’s tourist police and other agencies.

The Maj-Gen said that the Chinese men had rented house number 48/9 in Moo 6 Nong Prue for 95,000 baht. It suited their needs as it was quiet and out of central Pattaya.

But the local police became suspicious when the 12 Chinese men didn’t go anywhere, preferring to remain in their rented accommodation.

A search warrant was subsequently applied for from the Pattaya court.

The group were using fake profiles of pretty Chinese women on QQ Chat. They were taking orders for goods and not sending the merchandise. Losses are thought to be in the region of 10 million baht.

While the raid was taking place the group received an angry and tearful communication from one female Chinese victim who said she had been ripped off to the tune of 7,000 Yuan (about 28,000 baht).

She sent a picture of handcuffs expressing the hope that those who had conned her would soon be arrested.

She now has got her wish.

Police are expanding the inquiry to try and ascertain who was the mastermind behind the scam.