Three Vietnamese men, with alleged links to a passport-forging gang that caters to those wishing to travel to the United Kingdom, and their Thai male accomplice were arrested in Bangkok at the weekend, Immigration Bureau chief Pol Lt-General Surachet Hakpal told a press conference on Tuesday.

The three Vietnamese were arrested at Suvarnabhumi Airport on Saturday, and subsequent searches at several related locations yielded more than 20 forged passports – most of which were “reported stolen” passports that carried doctored information to fit each customer’s personal details – and some fake visa stamps.

At a location in the Khao San Road area, police arrested Wichit as the gang’s alleged accomplice in selling the passports, and seized Bt56,000 in ill-gotten cash, the Immigration Bureau chief added. 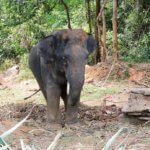