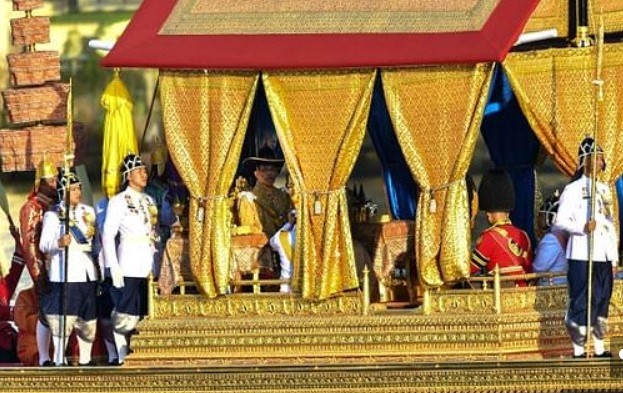 Flanked by more than 2,000 oarsmen rowing to a steady drumbeat, Thailand’s King Maha Vajiralongkorn traveled down Bangkok’s Chao Phraya river as part of a 52-barge flotilla on Thursday, marking the final event of his coronation.

The flotilla comes seven months after the monarch was crowned in an elaborate three-day affair that involved sacred bathing rituals and a grand procession where he was carried on a palanquin around Bangkok’s historic old quarter to greet the public.

Thousands of well-wishers dressed in royal yellow sat along the riverbanks, cheering on the king who wore a feather-adorned hat and Queen Suthida, his fourth wife, as they passed on a gilded Suphannahong — or “Golden Swan” — barge.

Seated next to them was Prince Dipangkorn Rasmijoti, the king’s 14-year-old son from his third marriage, while his two daughters from previous marriages were on a separate barge decorated with a pink exterior and naga-head figurines.

The river procession allows Thais a rare chance to see the royal family in the flesh — a prospect that drew elderly supporters.

“I am so excited because this is my last chance,” 69-year-old Renu Thanadauksorn told AFP. Having seen rehearsals on television, Youngyut Maeaksamut said he had wanted to experience the grandeur in person.

“I wanted to see the real thing, the actual ceremony, for once,” said the 66-year-old, who had waited in the sun for hours before to see the procession float past.

Public transport fares on Bangkok’s skytrain and underground subway were waived for the day, and onlookers were served complimentary meals while they waited.

The traditional event — which also drew foreign dignitaries and diplomats — originated from the river journeys of ancient Thai kings as they lead their battle flotillas into war.

Vajiralongkorn ascended the throne after the 2016 death of his father Bhumibol Adulyadej, who remains widely adored in Thailand and was revered as the country’s moral authority.

Since he took the throne, the assertive monarch has beefed up his security detail and retained direct control over the palace’s multi-billion-dollar fortune.

The flotilla had originally been scheduled for October 24, but was moved to mid-December due to worries over “water conditions and weather”.

Days later the 67-year-old king stripped his royal consort of all titles for displaying “disloyalty” and acting “against the appointment of the Queen”.

The public downfall of 34-year-old Sineenat Wongvajirapakdi provided a rare glimpse into the inscrutable private lives of Thailand’s ultra-wealthy and powerful monarchy.

The royal family sits at the apex of Thai society, and is protected by some of the world’s harshest anti-defamation laws. 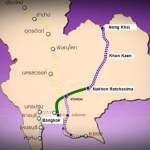 Thailand to FAST-TRACK high-speed railway in 2020

Russia’s only aircraft carrier is ON FIRE