Home » Inside the horror of Mexico’s raging drug war 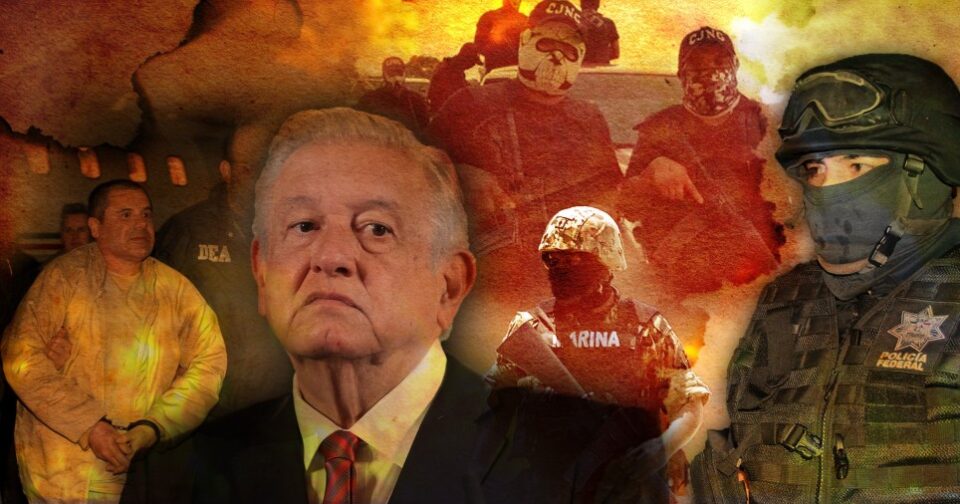 Instead, the government is doing battle with the cartels, the powerful gangs which have positioned themselves at the centre of the global drug trade and poisoned Mexican society for decades.

At the same time, these various cartels are at war with one another, vying for control of a multi-billion pound illicit industry.

It is this industry which links the everyday horror of a body turning up at the side of a lonely road in rural Mexico to a packet of cocaine being furtively handed between friends under a nightclub table thousands of miles away.

According to global conflict tracker ACLED, there were 614 fatalities linked to the drug wars in the first four weeks of 2022.

For context, that’s more than died in the Syrian Civil War over the same period.

The killing is not contained within the bounds of the criminal underworld – journalists, politicians and innocent civilians all find themselves in the crosshairs of the cartel gunmen.

Through force and corruption, the narcos have rapidly expanded into other criminal enterprises like human trafficking.

They have bribed and intimidated officials and police chiefs into fearful subservience, effectively replaced security forces in parts of the country and have taken over lucrative legal markets like avocado production.

In late 2018, Mexico elected a new leader declaring an end to the drug war.

Three years on, few still believe such a decision is within his gift.

The ability of Mexico’s cartels to maintain a brutal level of violence against rivals, law enforcement and anyone else who gets in the way has few international comparisons.

However, Vanda Felbab-Brown, an expert in international criminal violence at the US-based Brookings Institute, did venture one.

‘Over the last 15 years, the operational tempo of these groups in terms of hits, counter-hits and other attacks has been as high as the Taliban’, she told Metro.co.uk.

‘They are able to take entire cities like an invasion force associated with an insurgency, they deploy drones to drive people out of areas, they use quite stunning forms of violence.

‘They don’t have the same sort of organisation as a group like the Taliban…but the amount of violence they are able to produce is similar.’

Kidnap and murder is a regular occurrence – and like any other war zone, so too are mass killings, assassinations and extravagant forms of organised fighting.

Examples of these are innumerable. Below are just a few.

In Janaury 2021, the burnt remains of 19 people believed to be migrants trying to cross the border into the US through gang-controlled territory were found in smoldering vehicles.

Videos emerged earlier this year purporting to show explosives dropped from a drone into a camp operated by a rival group, a new and flourishing tactic in the cartel warchest.

Just this week, evidence has emerged of gangs using improvised explosive devices against the army, similar to those used in Iraq and Afghanistan against occupying forces.

In Michoacán state – one of the hotbeds of narco warfare – an ongoing bloody struggle between a local group and the powerful Jalisco Cartel has seen trenches, snipers and homemade armoured cars deployed.

Dozens of politicians and candidates have been killed, particularly around election times, and in June 2020 the chief of Mexico’s police narrowly avoided being gunned down in an ambush launched on one of the capital city’s most lavish streets, in full view of international embassies.

Mexico is forced to live with this misery and, in the words of Felbab-Brown, ‘the government is willing to absorb and endure an extraordinary level of violence.’

Estimates vary wildly as to how many have died in drug-related violence since the war officially began but it is thought to be at least 150,000.

That figure does not include the 73,000 people officially missing or disappeared as of mid-2020.

Mass graves filled with the nameless remains of the war’s victims are uncovered with grim regularity and Mexico has become a land where bodies and bones seem to grow out of the ground.

A brief history of the Mexican drug war

The 2,000 mile border which separates Mexico and the US is simultaneously the biggest boundary and the biggest opportunity in the global drug trade.

Early traffickers who knew how to transport cargo across this line on the map became a crucial part of the network transporting drugs from South America into their primary market.

For 70 years, Mexican politics was dominated by the PRI, a shape-shifting behemoth which used corruption, repression and vote-rigging to hold on to power until 2000.

PRI leaders turned a blind eye, officials were bought off and Mexico’s gangs of delivery boys for the production giants – by now united under the Guadalajara Cartel – became a key cog in the global drugs machine.

Mexico’s drug war began as a civil war inside the cartels, triggered by the 1989 arrest of ‘the Godfather, Miguel Ángel Félix Gallardo, for the torture and murder of an American agent.

As the PRI’s grip on power began to loosen, the corrupt networks that kept the black market ticking over beneath the surface began to break up, further fuelling violence among groups jockeying for position in this new landscape.

The awkward peace between the state and the cartels came to an end once and for all with the collapse of the one-party system which dominated the nation’s politics until the turn of the century.

Felbab-Brown said this change in the power balance contributed to the disorder, adding: ‘It meant every time there was a change in government, there’d be a change in the criminal corruption networks that were once very stable but now shift with every election.’

While Mexico’s politics changed, the cartels were splintering. Turf wars steadily ratcheted up in the early 2000s despite some modest government action against the once-untouchable traffickers.

Then in 2006, war was declared. The newly elected president sent thousands of troops into the state of Michoacán to drive out the narcos, an operation in which hundreds died.

Since then, the US has spent $3.3 billion supporting their neighbours as part of the global War on Drugs and tens of thousands of troops have marched against the cartels.

Between 2006 and 2012, president Felipe Calderón went after the ringleaders with extraordinary success. Of the top 37 kingpins in the Mexican drug trade, 25 were captured or killed during those years.

Critics – including the current president – say this strategy of cutting the head off the snake only fuelled inter-gang warfare, with innocent people caught in the crossfire of the resulting power struggles.

The war rumbled on through another change of leadership until 2018 when a new general took charge, this time with a new battle cry: ‘hugs, not bullets’.

AMLO and the narcos

Andrés Manuel López Obrador – commonly known by his initials – swept to power on a wave of economic populism in 2018, promising to end the drug war.

To his supporters, he is a charismatic reformer in touch with the people. To his critics, he is Mexico’s answer to Trump, a blossoming autocrat who tells people what they want to hear and hoards power.

His ‘strategy for peace’ promised amnesty for traffickers, radical police reform and pulling the army off the streets. The focus would shift from fighting to addressing the underlying socio-economic problems.

But once in power, AMLO’s strategy has seemingly been flipped.

He has invested in an expensive process of militarisation, signed off on the army’s continued role in policing for the foreseeable future and reform is slow, at least in part because of the Covid-19 pandemic.

The army remains on the streets to prevent violence against civilians but is under orders not to take on the cartels.

His critics accuse him of a lack of coherence, elected on a promise to end the war without a plan to do so.

As evidence of this weakness, they point to the October 2019 Battle of Culiacán, a botched attempt to capture the son of Joaquín Guzmán – better known as El Chapo.

Under El Chapo’s leadership, the Sinaloa Cartel came to dominate the Mexican drug trade but his arrest has created a bloody void.

A key component of the war in 2022 is the feud between the organisation he left behind and the Jalisco Cartel, a brutal group which has rapidly become one of Mexico’s most powerful in recent years and is known for Isis-like displays of extreme brutality.

When government forces attempted to arrest El Chapo’s son at the behest the Americans in 2019, they were met by hundreds of gunmen, armed to the teeth and organised like a military unit.

Within hours, the narcos had control of the city, had taken civilian hostages – including family members of soldiers – and smoke was seen rising above the skyline.

The state’s security forces were beaten and their target was released. AMLO defended the surrender as necessary to spare the lives of innocents.

Another year at war

In the face of this conflicted response, the main inter-cartel war continues and countless local conflicts play out around the country.

There can be no ‘peace talks’ with criminal groups – so who can stop the killing?

Felbab Brown said: ‘AMLO has a preference that the criminal groups will sort it out among themselves but they don’t have the capacity to.

She added: ‘It’s a market that’s out of control – no one has the ability to impose any sort of stability.’

January was by no means the most violent month on record and the government even hailed a small drop in the murder rate as evidence their strategy is working.

But Felbab-Brown is highly sceptical: ‘Any reduction in violence is what I refer to as “narco peace” – it is temporary and ephemeral, it’s only in place for a limited amount of time.

‘These periods of stability are at the discretion of the criminal groups, they don’t come about because of any sort of effective policy.

‘The drop in the murder rate recently is incidental. Every time fewer people die it’s a good thing – but it’s not permanent.’

It remains to be seen whether 2022 will be among the bloodiest since the war began in 2006 but there are few reasons for optimism.

The gangs remain splintered and desperate for control, there is little faith internationally in AMLO’s strategy and effective reform of the police and army is still a long way off.

Felbab-Brown warned the coming year could be a long and hard one for war-weary Mexico.

’I’ve been saying for a number of years that violence has got to go down’, she said, ‘that it is extremely difficult to maintain this level’.

‘But the narcos keep managing it and keep recruiting enough foot soldiers to use as cannon fodder.

‘They keep up the operational tempo of violence – not just murder but other forms of violence which don’t leave bodies in the street too – and I don’t see how that is going to change.’

In the meantime, Mexicans will have to hope and pray AMLO’s great gamble pays off. 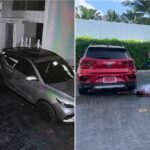 Passports and cash seized from villa of Indian gangster 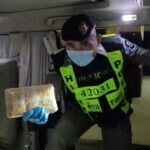