Home » The world’s craziest resort, and it’s NOT Pattaya

BOOZED-UP Brits were let loose in some racy videos from a party hotspot – and Daily Star Online can now reveal that 2018 will be wilder than ever.

The Greek island of Zante has attracted thousands of tourists over the last few years, desperate for the perfect mix of sun, sex and shots.

Pictures and videos have surfaced showing girls shedding their clothes, lads downing whatever liquid is put in their mouths and a whole host of X-rated drinking games.

But Elliot Whyte, who works as a rep on the island, believes this year will be the best yet.

Speaking exclusively to Daily Star Online, the 24-year-old said: “2018 will be better because I’ve seen a new wave of fresh-faced reps ready to take over from the old ones and continue the madness.

“I have a feeling 2018 will be one of the best seasons to date, as it seems the holiday companies are offering special deals, so I think it will be extra busy.

“Zante is one of my favourite places to work and all madness aside, it’s a beautiful place to visit – it’s one of the best party islands out there.”

In fact, the rep said that some holiday companies are already fully booked – despite the season not beginning until May.

One picture from a boat party off the coast of Zante shows a bikini-clad babe performing a raunchy dance move on her male friend.

But Elliot, who hails from Blackpool, says Zante is far better as it “attracts all age ranges”.

“Malia, Magaluf and Sunny Beach etc it seems limited to 18-21-year-olds,” he added.

“Also a lot more daytime activities go on in Kavos and all events are very reasonably priced, unlike in other resorts where you get totally ripped off.” 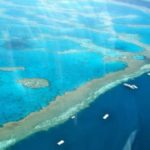