Bangkok police have arrested a man from Chaiyaphum for allegedly stealing from victims who were answering the call of nature in men’s rooms of a large shopping mall in Ratchadamri.

Lumpini police chief Pol Colonel Akkarawut Thanirat said Sahachart Rasameeduan, 20, was accused of stealing from at least two men while they were sitting on the toilet, leaving their bag hung on a hanger on the wall behind them.

Akkiarawut said the suspect climbed over the wall of an adjacent toilet room and reached down to steal hanging bags while his victims were looking forward, unaware of what was happening behind them.

Police seized from the suspect two mobile phones, an iPad, some clothes and a pair of Adidas sneakers.

Akkarawut said police started the investigation after a victim, Sathit Saengthaweep, filed a complaint with his station that his bag had mysteriously disappeared while he was using a toilet room in a well-known shopping mall in Ratchadamri area.

On Tuesday, another victim, Sutham Phosakkul filed a complaint with the police that his bag was stolen while using a toilet room in the same mall.

Police checked security camera footage and tracked the thief to the Sukhumvit 50 Tesco Lotus, store, where he was arrested.

Metropolitan Police Bureau deputy commander Pol Maj-General Sompong said the suspect admitted that he had on several occasions stolen from men’s rooms while his victims had no idea what was happening as they relieved themselves.

Sompong said Sahachart was released from jail in November last year after he was imprisoned on a theft conviction. 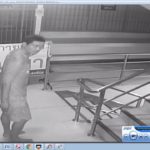