The Queen has dropped PrinceHarry and Meghan Markle’s royal titles from a statement about the couple’s future in The Firm in a move one commentator said was ‘very striking’.

Her Majesty, 93, released a statement following the royal summit at Sandringham House today and, in a break from tradition, referred to Prince Harry, 35, and Meghan, 38, by their first names rather than their titles as ‘The Duke and Duchess of Sussex.’

Some fans said it indicated the couple could be stripped of their royal positions, in a move that would send shockwaves through the royal family.

Royal commentator Victoria Arbiter said the move was likely to be telling, posting on Twitter: ‘I do think it was very striking, particularly in a statement from the Queen.’

Meanwhile, another royal fan commented: ‘Interesting the Queen refers to ‘Harry and Meghan’ not the Duke and Duchess of Sussex.

‘Are they having to give up their titles? This would be an indication they are…’

One wrote: ‘Is there anything in that The Queen refers to Harry and Meghan without any titles? Hope so, because they don’t deserve them.’

However, others disagreed, saying: ‘It’s striking, but I think she wanted to highlight they are a family and she is supporting her grandson and his family.

‘Can you imagine how cold and impersonal this would have sounded had she used their titles.’

The statement comes after Harry, Prince William and Prince Charles were pictured leaving the unprecedented summit in separate cars after more than two hours of crunch talks with Her Majesty.

Harry faced Her Majesty, his brother and his father for the first time since quitting as a senior royal with Meghan ‘dialling in’ to support her husband from Canada.

In the statement released by Buckingham Palace after today’s showdown, the Queen said: ‘Today my family had very constructive discussions on the future of my grandson and his family.

‘My family and I are entirely supportive of Harry and Meghan’s desire to create a new life as a young family. Although we would have preferred them to remain full-time working members of the Royal Family, we respect and understand their wish to live a more independent life as a family while remaining a valued part of my family.

‘Harry and Meghan have made clear that they do not want to be reliant on public funds in their new lives.

‘It has therefore been agreed that there will be a period of transition in which the Sussexes will spend time in Canada and the UK.

‘These are complex matters for my family to resolve, and there is some more work to be done, but I have asked for final decisions to be reached in the coming days.’

Prince Harry had wanted his 93-year-old grandmother, father and brother to let him and his wife keep their royal titles while living abroad and grabbing ‘financial independence’ to earn their own money using the Sussex brand, which experts say could be worth £400million.

Ahead of the meeting, the Queen was said to want guarantees that the proposed Sussex business empire wouldn’t damage the royal family.

William and Charles were expected to reject the couple’s demands for taxpayer-funded police bodyguards while in the UK and were concerned about the environmental impact of criss-crossing the Atlantic to carry out royal duties in Britain and across the globe.

Charles is also said to be ‘hurt’ by Harry and Meghan’s decision to quit because he has secretly given them millions to fund their lavish lifestyle and furnish their Windsor home in a show of ‘love’ for the couple since they married 20 months ago, according to the Evening Standard. 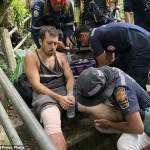 Austrian BASE jumper rescued from side of Thai cliff