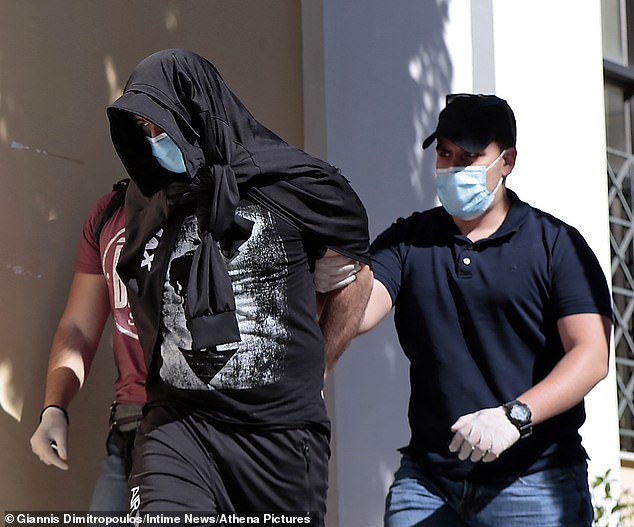 A Georgian man suspected of savagely killing a British woman during a burglary at her home in Greece has been pictured for the first time following his arrest.

Caroline Crouch, 20, was tortured and strangled in front of her 11-month-old daughter Lydia in her Athens home last Tuesday while her husband, helicopter pilot Charalambos Anagnostopoulos, 33, lay bound and gagged.

Police arrested the unidentified 43-year-old last week as he tried to flee the country on a false passport because he had previously been linked to a similar burglary to the one in which Ms Crouch was killed.

A police source said DNA analysis suggested the Georgian man was one of five people who tied up an old couple and their cleaning lady in another burglary in March.

Photos taken today show him covered in a dark hoodie being led into an Athens courthouse to answer a charge of robbery for the incident two months ago.

His arrest came as Miss Crouch’s heartbroken husband shared a picture of their wedding day, telling his wife they would be ‘together for ever’.

Babis, who had been tied up and left after the robbery, had only been able to raise the alarm after using his nose to dial the police on his phone.

The pilot eventually managed to phone police, and officers arrived to find baby Lydia crying and instinctively patting her mother’s lifeless body in an apparent attempt to rouse her.

The baby was unhurt but their dog, Bruno, had been strangled to death.

The Georgian man was arrested in the Evros region of north-east Greece on Friday.

His car was stopped close to the Bulgarian border for a routine check and he was found to have a fake passport, a police source said.

Athens Police said in a statement: ‘Yesterday in the afternoon in Athens, a 43-year-old foreigner was arrested by police officers of the Property Prosecution Department of the Attica Security Directorate, against whom a case had been filed for robbery in collaboration and an Arrest Warrant had been issued.

‘He is accused that on 5-3-2021, together with four unknown accomplices, having their full face features covered, entered a house in Pikermi, Attica, immobilized an elderly couple and the domestic worker and deducted money and jewelry.

‘It is noted that the 43-year-old, at noon on 14-5-2021, in order to leave the country, went to the Border Crossing Point at Evros area, where he was arrested by police officers of the EvrosPassport Control Department, for possession and use of a forged travel document, forgery and of illegal exit from the country.’

Police spokesman George Kalliakmanis said the tactics used by the burglars in March were almost identical to the brutal techniques used by thugs who killed Miss Crouch.

‘In that burglary they tied up the old couple and forced them to say where they kept their money,’ he said. ‘Even after they had found the money they continued to demand where the rest of the couple’s valuables were.’

The three men who broke into Miss Crouch’s villa via a back window stayed for an hour, repeatedly demanding ‘where is the money’ in broken Greek, Mr Anagnostopoulos said.

A police source has claimed the Georgian man was attempting to flee and the timing indicated he may have been involved in the killing.

The source said that although the earlier break-in was in March, it was only now that the man felt compelled to leave due to the nation’s disgust at Miss Crouch’s death.

Mr Anagnostopoulos yesterday posted a photo of his wedding day online, show him holding hands with Miss Crouch on a beach. He wrote: ‘Together for ever. Have a nice trip my love.’

Detectives will today show the pilot mugshots of 30 suspects.

Investigators have linked a dozen local raids to Tuesday’s burglary, in which thieves took £10,000 in cash hidden in a Monopoly box and £20,000 worth of jewellery.

Mr Anagnostopoulos told investigators he caught a glimpse of one of his attackers, describing him as a tall, dark-skinned and slightly overweight man aged about 30. He also identified weapons including a silver Colt revolver and a black pistol.

A police source said the unusual weapons may be key to identifying the killers.

Miss Crouch, a statistics student, was buried on Friday on the island of Alonissos.

She had moved to the island when she was eight with her Filipino mother, Susan Dela Cuesta, and father David Crouch, 78, a former British serviceman. 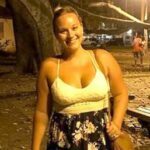 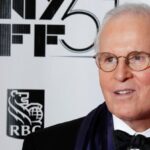