Task force to be formed to track…

Former Ratchaburi MP Thawee Kraikupt has denied he was trying to run away after an accident involving his Mercedes-Benz and a motorcycle in Photharam district on Saturday afternoon that injured the motorcycle driver.

The accident occurred at an intersection near an irrigation canal bridge on the Photharam Hospital-Ban Kong Road.

Speaking to a press conference at a hotel in Ratchaburi’s Muang district on Sunday, Mr Thawee said he was on the way from home to the Photharam municipality market when the accident happened.

Approaching the intersection, he said, he braked and looked in both directions. Seeing no other oncoming traffic, he began to cross the intersection, but a motorcycle suddenly cut in front of his car, causing it to hit the motor-bike in the rear. The motorcycle driver was thrown about 15 metres by the impact.

Mr Thawee said that since this happened in the middle of the intersection, he did not dare to stop the car  for fear that another accident would follow.He stopped a short distance past the intersection and walked back to talk to the injured rider, who was later identified as Pakit Prangchan, 17. Mr Thawee said he tried to take the boy to hospital but he turned down the offer, saying he was waiting for his mother. At the time, rescuers were tending the boy’s wounds.

Mr Thawee said he returned to his car and waited inside. Shortly after that a vehicle drove out of the intersection. Believing the boy was inside it, he drove after it, but the vehicle stopped, prompting him to honk the horn. He learned later the boy was not in the vehicle. This might have caused people to believe that he was trying to escape, he said.

When police arrived, he asked them if there was a motorcycle repair shop nearby. He then paid for the repair work, gave the boy a sum of money for reparations, and paid a 500-baht fine to the police for reckless driving, Mr Thawee said.

Mr Thawee said that after the accident he had been unfairly accused on social media of trying to escape. He insisted that he had no intention of doing so.

Mr Pakit, the motorcycle driver, said that after his motorcycle was hit and he was thrown some distance  from the spot, the Mercedes-Benz drove off as he was trying to stand up. The driver, who he did know was  Mr Thawee, returned only after the police arrived.

According to the Facebook page of the Sawang Ratchaburi rescue team, which was the first on the scene, Mr Thawee may have been trying to escape before police arrived.

They wrote that while they were applying first aid to the victim and waiting for police, Mr Thawee abruptly drove off, but hit the fence of a nearby house and almost ploughed into the rescuers tending to the victim.

After that, Mr Thawee turned left onto the canal road where the rescuers’ vehicle was parked, blocking his way. He honked the horn for the vehicle to move when the police arrived, said the rescuers on their Facebook page. 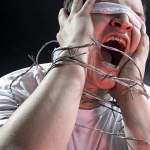 Mark KellyJuly 6, 2020
Police have launched a manhunt for a man who entered a hospital and allegedly tried...
END_OF_DOCUMENT_TOKEN_TO_BE_REPLACED

Task force to be formed to track tourists