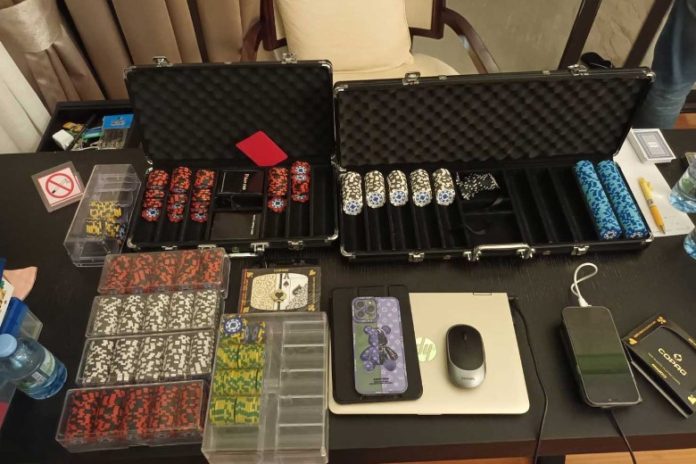 Eleven people were arrested for gambling, eight Thais and three foreigners, when police raided a villa in Muang district in the early hours of Friday.

Police entered the villa on Thep Prathan Road around 3.30am.

There were 11 people in a room playing poker – eight Thais from Bangkok, a Cambodian, one Briton and a Dane.

Ther were two decks of playing cards on the table along with 642 poker chips which according to police were valued at 1,028,400 baht.

Three more decks of cards, a computer, 783 poker chips said to be worth 1,579,150 baht, and a book detailing bets and the starting time of the game at 9.30pm on Thursday.

All those arrested were men. One of the Thais admitted to being in charge and was charged with operating a gambling den. The others were charged with gambling. All confessed to the charges, according to police.

All were held in police custody at Muang police station.

The raid was mounted after Provincial Police Region 8 received information from an informant. A post on Nub Nusa Facebook account had encouraged people to attend a gambling party in Phuket.

A yacht was also arranged and many young women would be there, according to the post.

Police did not mention raiding a yacht.

Playing cards and poker chips seized at a villa in Phuket’s Muang district in the early hours of Friday. Eleven people were arrested – eight Thais from Bangkok, a Cambodian, a British national and a Dane. (Photo: Achadthaya Chuenniran)