THAILAND REOPENING TO TOURISTS: EVERYTHING YOU NEED…

Home » Thailand struggles to hold back the BAHT

Thailand’s battle to keep its surging currency at bay is increasing the odds of a second interest-rate cut this year.

The Bank of Thailand is set to reduce its benchmark policy rate Wednesday by 25 basis points to 1.25%, matching a record low, according to 16 of 26 economists in a Bloomberg survey. The rest expect the rate to stay at 1.5%.

In the spotlight is the baht’s 9.2% climb against the dollar in the past year — the strongest in emerging markets, and in defiance of periodic foreign exchange intervention by the Bank of Thailand, an August interest-rate cut and efforts to stem short-term inflows.

“The urgency seems to be more now,” said Radhika Rao, an economist at DBS Group Holdings Ltd. in Singapore, who changed her view for the rate cut timing to Wednesday from December. She sees such a policy easing as “tantamount to the central bank’s signaling its discomfort with a strong baht.”

Still, Rao says, a cut “might lower the baht’s yield appeal, but it will be no panacea.”

Sluggish growth and inflation also have tipped the scales for some analysts now eyeing a rate cut at Wednesday’s meeting.

“With growth significantly disappointing the BOT’s latest forecasts, and inflation further undershooting its target, we now expect the BOT to deliver a 25 basis-point policy rate cut” this week versus an earlier forecast of December, Charnon Boonnuch and Euben Paracuelles, economists at Nomura Singapore Ltd., wrote in a Nov. 1 research note. 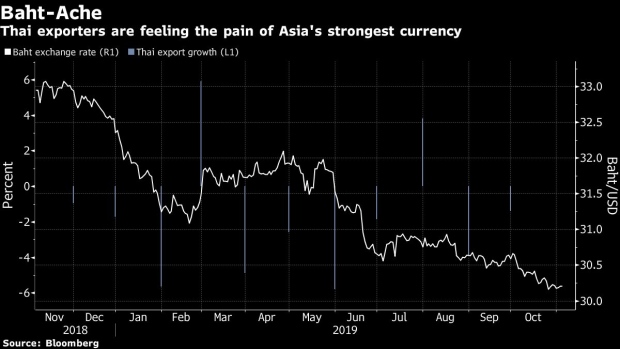 The hit to exports and tourism from currency strength has put the economy on course for the slowest growth in five years. The central bank has said it’s planning to ease rules on capital outflows in a further effort to restrain the baht’s surge.

At the same time, speculation is growing that the country could be added to a watchlist of potential currency manipulators in a forthcoming U.S. report on the foreign-exchange policies of key trading partners.

Such a step would complicate currency and monetary policy, according to Citigroup Inc. The U.S. on Oct. 25 said it will suspend $1.3 billion in trade benefits for the Asian nation, which some analysts interpreted as a warning shot.

U.S. Commerce Secretary Wilbur Ross said Nov. 4 the planned suspension had been blown out of proportion, with the Thai government adding that the U.S. agreed to reconsider the step.

Thailand, which ran a $19.6 billion goods surplus with the U.S. in the 12 months through August, denies intervening in the foreign exchange market for an unfair advantage in trade. The central bank has said it only acts against excessive baht swings.

Coinciding with the baht strength is a consistent dip in inflation, with the consumer price index remaining stubbornly below the 1% to 4% goal for five months.

The monetary authority intends to narrow the target but has yet to reveal the proposed new range.

The Bank of Thailand has continued to flag financial stability risks, with lingering concern that consumer debt could be bubbling, including for homes and automobiles. 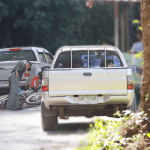 Foreign tourists may be allowed back into Thailand in July without doing...

Mark KellyMay 30, 2020
Many untrue stories are starting to surface like this one which is being widely shared...
END_OF_DOCUMENT_TOKEN_TO_BE_REPLACED