A young Thai boy was found dead in Tokyo just hours after his family had reported him missing.

Tien Sookhananonsawat was just 14, was reported missing after he and his family were on holiday. Although a spokeswoman for the ministry has said the police have yet to confirm the cause of the young boy’s death, his mother had posted online that the boy had died in an accident.

Tien’s mother had posted “we have found Tien, he left us peacefully because of an accident that no one could have foreseen”. Yuwajitra Watchara-arpa The boy’s mother had written on Facebook “I’d like to plead with everybody to let our family spend this time and peace we declined to answer any questions or have media contact.

Tien Had left the hotel room on during the night of April 15th without any explanation as to why he was leaving. He had not taken any travel documents or money with him and on another Facebook post last night his mother pleaded for information concerning her son.

In a statement issued by the Thai Foreign Affairs Ministry, they said that the Japanese police had contacted the Thai Embassy in Tokyo to inform them that the boy had been found approximately 1 am and was already dead.

It is not certain how the teen died, but an autopsy is already underway in determining how the boy died. 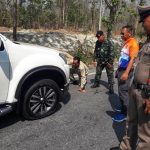 HM the King is concerned