Thailand has released a student activist jailed for sharing a profile of King Maha Vajiralongkorn on Facebook.

He was arrested in 2016 for sharing the profile published by BBC Thai, soon after the king ascended the throne

Mr Jatupat left prison early on Friday morning and was reunited with his family and friends who were waiting outside.

He was one of more than 2,600 people to share the online profile published two days after the new king ascended the throne in December 2016.

An opponent of the military-backed government who has taken part in numerous protests, he was the only person to be prosecuted over the article.

Pleading guilty in lese-majeste cases can significantly reduce sentences in Thailand, where punishment can be severe.

While the United Nations has repeatedly called on Thailand to amend the law, the government says it is necessary to protect the monarchy which is widely revered across the country. BBC

Tropical bay from ‘The Beach’ to close until 2021 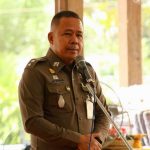