The Royal Thai Police have seized Bt50 million in assets in southern Thailand from a local politician. One of the biggest drug kingpins in Narathiwat Province.

Including the residence of the Narathiwat Provincial Administration’s politician, who was still at large.

“The suspect is among the biggest drug traffickers in southern Thailand and he is believed to be linked to a drug trafficking syndicate in Malaysia,“ he told reporters.

Police raided the politician’s residence and seized his luxury cars and motorcycles, besides freezing his nine bank accounts.

The politician is believed to be the mastermind in the smuggling of 459kg of “ice” (crystal methamphetamine) on July 7.

Police issued a warrant for the politicians arrest on July 12.

The warrant comes after the arrested of four drug runners revealed that they were paid to deliver the drug.

Both suspects who are from Waeng district, Narathiwat were waiting to take the drug from the first two suspects.

It is believed that the drug had been smuggled into Chiang Rai through the town of Tachileik, Myanmar. 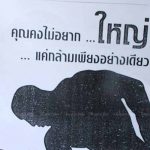