A Senior Thai policeman has admitted to his part in helping Yingluck escape by driving her to the border the night before she was due in court.

After getting a five-year sentence yesterday despite having fled the country, sources are beginning to come forward about how ousted prime minister Yingluck Shinawatra really got out of the country, despite being under heavy surveillance by the current government.

Police officer Pol. Col. Chairit Anurit, a deputy commander with Bangkok’s Metropolitan Police Bureau (MPB), has now publicly admitted that he drove the former Thai leader in a Toyota Camry to Sa Kaeo, a province that borders Cambodia, the night before she was to appear in court to face corruption charges related to her rice-pledging scheme, reported Thai PBS.

Pol. Col. Chairit now may face charges of forging documents since it is believed that the license plate on the getaway car was a fake. Chairit, who denied the forgery, has been interrogated and released since he has not yet been charged. It was not immediately clear what other charges he would face.

Police are in possession of a license plate found inside the car and are trying to figure out if it’s real or fake.

But since Pol. Col. Chairit allegedly helped Yingluck escape before her arrest warrant was issued, he may not face a criminal charge, according to Metropolitan Police Chief Sanit Mahathavorn.

As of now, the cop has been transferred and may face nothing more than disciplinary action if it was found he missed work to give Yingluck a ride, as the investigation is ongoing, Post Today reported.

Meanwhile, an arrest warrant for Yingluck will be sent to police stations around Thailand, including to each immigration checkpoint.

Yingluck is in Dubai, according to Thai PM 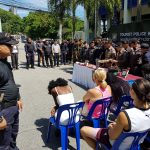