Zurich Delay: Thai Airways International has ordered four pilots involved in a flight delay in Zurich last week not to discuss the matter in public.

Zurich-Bangkok flight TG971 was delayed for two hours on Oct 11 because of confusion over seating arrangements, after two off-duty pilots were denied first-class seats by the THAI station manager in the northern Swiss city.

Two inactive pilots, called deadheads in aviation jargon, believed they were entitled to first-class seats on the flight but all the seats had been taken.

A deadhead is an airline crew member who is sent to a particular destination to assume a duty or for other purposes. On the flight they are on, they are inactive or not supposed to work as a crew.

Flight TG971 left Zurich only after a couple agreed to give up their first-class seats for the two pilots.

The problem emerged after a Boeing B777-300ER, which was supposed to be used for the flight, was found to have a problem in Zurich and a Boeing B747-400 was used instead.

The pilots who were supposed to fly the B777-300ER were therefore sent home because they were not licensed to fly the substitute plane.

The B777-300ER did not have first-class seats while the 747 offered them. The station manager therefore upgraded all business-class passengers to first class, leaving no seats for the two inactive pilots.

News about the delay went viral on social media and the pilots were criticised for thinking only of themselves without caring about the passengers.

After apologising to the passengers on the flight, THAI set up a panel to investigate the issue.

A THAI source told Matichon Online on Saturday that all four pilots involved were ordered not give any information about the incident after the chairman of Thai Pilots Association gave an interview and a pilot posted an item on Facebook in their defence.

The source said the problem stemmed from internal “miscommunication”.

“There is no clear guideline on what to do once the tickets have been sold on non-first-class flights and a plane with first-class seats is used instead. Should the business-class passengers be upgraded to first class or should the section be closed?

“What happened on that flight is the business-class passengers were upgraded but all the services remained business class.”

The source explained that for active pilots, crew cabins are available but if they aren’t, seats must be reserved for them — first class for pilots or business class if a plane doesn’t have a first-class section.

But for inactive pilots, there is no rule that first-class seats should be reserved for them or not, the source continued.

“We have to wait for the results of the investigation. What we know now is that all the first-class seats were taken and the inactive pilots should have been able to take business-class seats back home. But the pilots and the station manager should not fight and hold the passengers hostage,” the source said. 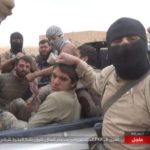 ISIS take 700 hostages and are executing 10 EVERY DAY