A 24-year-old woman who police called a “prolific identity theft suspect” was arrested last week over a year and a half after LAPD detectives began an investigation that ultimately led to her becoming a wanted fugitive, police said Tuesday.

Tansuvit was arrested outside her residence in the 1000 block of Wilshire Boulevard in downtown L.A. on Aug. 14, the Los Angeles Police Department said in a news release.

In December 2017, detectives investigating a complex identity theft case involving multiple incidents and victims and identified Tansuvit as the suspect.

After being booked on multiple felony counts of identity theft, Tansuvit was released on bail.

She later failed to appear in court for her jury trial and a felony bench warrant was issued for her arrest.

In July, Tansuvit and Carrasquillo engaged in a high-speed chase with police. During the pursuit, officers pulled back from Carrasquillo’s high-end sports car, and went into tracking mode for the public’s safety.

Tansuvit was then able to get out of the vehicle and flee on foot, police said.

Carrasquillo was eventually arrested for felony evading. He was released on bail, but later failed to appear for his court date.

Then, after a brief pursuit that ended in Woodland Hills Tuesday evening, Carrasquillo was arrested, LAPD stated.

Investigators ultimately located Tansuvit at her home and placed her under arrest.

A warrant search of her home uncovered a large quantity of evidence, including a credit card mill, and identity theft making equipment, police said.

Tansuvit was booked on additional identity theft charges, as well as her felony warrants.

Due to her past history of skipping bail and running from authorities, she was placed on a probation hold. 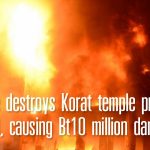 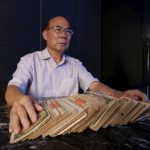