A Thai man who dreamed of flying an F-16 jet since he was a child made his dreams come true. Well, almost.

Kunlung Chet, 50, said he always wanted to climb into the cockpit of one of the iconic war planes but knew his goal was unlikely to happen.

Not one to give up on his dreams, Kunlung, a fruit seller, built a mini-replica which he then fastened on top of his Honda moped.

He now whizzes around the streets in his home in Nakhon Si Thammarat with the green casing covering him.

He said: ”I had to remove some of the plastic from the bike to give me more room and make it more comfortable, but now I feel like this is the strongest motorcycle in the world.

”I’ve had a dream since I was a child to fly an F-16 but the dreams never became a reality. I found the materials in the house and made an F-16, painted in green and put it on the bike.

”It is rain proof and at night it stops insects from hitting my face. I’m very proud of it and people who see it are very impressed.” 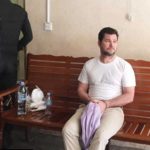 Briton wanted for MURDER in Thailand arrested in Spain