In a turn of normal events in Pattaya, a Thai man attempted to take advantage of a ladyboy and snatched her wallet and ended up arrested.

The man, 37-year-old Seri Seuameng, saw the victim, 33 years old Patrasit Khongbanjop (The one in the surgical mask in the photo) , walking on the street and offered her a ride on his motorcycle to her home in South Pattaya early Friday Morning this past weekend.

Mr. Khongbanjop thought Mr. Seuameng was being a good samaritan and accepted the offer. However, when Mr. Seuameng began to drive towards Rompho Market in Jomtien, Patrasit knew something was wrong and jumped off the motorbike.

She discovered, however, that the thief had already taken her wallet with several thousand baht while she was riding on the bike and that the so-called good Samaritan was an experienced pickpocket.

Patrasit reported the matter to the police who traced Mr. Seuameng through CCTV and found him at his residence. He admitted to the theft.

It turns out Mr. Seuameng has a long criminal history, with multiple drugs, gambling and pickpocketing offenses. He will likely be returning to jail for the crime. 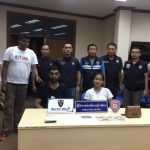 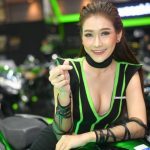