London’s School of Oriental and African Studies (SOAS) has denied claims the prestigious institution possesses a 13th-century sculpture likely smuggled from Thailand
“We strongly reject any suggestion that SOAS University of London has handled this donation improperly. The allegations made in the blog post by this student are without foundation,” SOAS spokesperson Vesna Siljanovska told The Nation by email. Siljanovska was referring to allegations made by SOAS scholar Angela Chiu, who had accused her school of accepting the one-metre-tall Buddha statue that stands at the entrance to its Brunei Gallery. It was gifted to the SOAS by American alumni Mary and Paul Slawson who reportedly bought it minus documents attesting to its provenance some 30 years ago. On its website, the SOAS describes the statue as “a delightful 13th-century Lopburi Buddha torso of Thai origin”. It has denied any wrongdoing in accepting the sculpture. Siljanovska added due diligence was carried out by SOAS in accordance with SOAS’s Collections Management Policy and Due Diligence Procedure for the acceptance of Philanthropic Gifts. These make clear that:

“The School will not acquire … any object or specimen unless the Governing Body or Responsible Officer is satisfied that the School can acquire a valid title to the item in question, and that in particular it has not been acquired in, or exported from, its country of origin (or any intermediate country in which it may have been legally owned) in violation of that country’s laws.” Siljanovska said: “In line with this policy, before accepting the gift, checks were carried out by our experienced Galleries and Exhibitions Manager and included placing the details of the object on the Art Loss Register (the largest art data base in the world for lost or stolen artworks and artefacts).” On Thursday the Foreign Ministry announced that Thai Ambassador to the UK Pisanu Suvanajata had contacted the SOAS director, Baroness Valerie Amos, about the case. Thai embassy officials in London also met with John Hollingworth, head of Galleries and Exhibitions at the SOAS. “He informed them that his team had checked with the International Council of Museums and found that the artefact is not on the ICOM [International Council of Museums] Red Lists of lost or vulnerable artworks.” However, Chiu commented that checking the ICOM Red List was not sufficient to identify provenance. There are no Thai objects on the Red List. “ICOM does not say that checking its Red List is a substitute for documented provenance. ICOM’s Code of Ethics states: ‘Museums should avoid displaying or otherwise using material of questionable origin or lacking provenance. They should be aware that such displays or usage can be seen to condone and contribute to the illicit trade in cultural property.’” SOAS is now preparing documents and information on the statue for presentation to the Thai Embassy in London. Once it has gathered more information on the case, the Foreign Ministry will report back to the Culture Ministry’s Fine Art Department for possible action. RT – EP 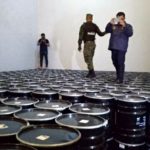