Horrifically, this baby boy in Thailand was discovered buried in the earth, with knife wounds all over his body.

Thank goodness a woman tending the nearby farm heard his wails and took the baby to safety. By the grace of God, a Swedish couple adopted the infant soon after he recovered.

In February 2016, a farm woman, named Kachit Krongyut, was taking her cows out to graze on her farm in the district of Wangai of Khon Kaen Province, Thailand, when she heard what sounded like wailing.

The sound was coming from a nearby soil patch, which looked like it had recently been dug up.

At first, Kachit, then aged 53, thought someone had buried a small animal. But then to her horror, she saw that a baby’s foot was partially sticking out of the soil.

In a desperate attempt to save the baby, she frantically dug up the soil using her hands, The Mirror UK reported

“At first, I thought someone had buried their pet alive, but then I saw a foot,” she told local media. “I tried to control myself and called for help. The baby was buried with its face facing down.”

After pulling the infant from a shallow grave about 20 centimeters deep, she saw that the baby had what appeared to be 14 knife wounds all over his body.

It seems someone had left the poor thing to die.

The baby boy, now named Aidin, was immediately taken to the Wangai hospital, where the doctors determined based on old bruises on the child’s stomach that he had suffered from long-term abuse ever since he was born.

Doctors said the pressure of the soil helped prevent the lucky baby from bleeding to death from the stab wounds.

Afterward, the woman’s husband, Pornchai, told police that he had seen footprints in the soil, as well as motorcycle tracks nearby.

This led to the discovery of the suspect, a then-42-year-old mother, who was charged with attempted murder and abandoning her child.

Little Aidin miraculously recovered after going through three months of treatment. In the pink of health, the “miracle baby” was taken to the Kaen Thong Orphanage and was soon adopted by a couple from Sweden.

Supachai Pathimchart, from the Kaen Thong Orphanage, where the child had been living, said that “[all] of the safety checks have been carried out to make sure Aidin goes to a good home… We’re very happy that he will be going to a good home and [will] have a comfortable life… He survived a very bad experience but he has a lot of character and he’s happy with life.”

”He is very lucky. A few hours later and he might not have survived,” Pornchai said. “He will do well in life we’re sure.”

Such cruelty is simply unimaginable, and people definitely need to speak up and act when they see something like this.

Moreover, we ought to be even more attentive to setting a positive example for others in society—for it does make a difference to demonstrate good morals wherever we go, and with whomever we meet. 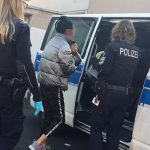 Nationwide network of Thai Ladyboys in Germany is busted