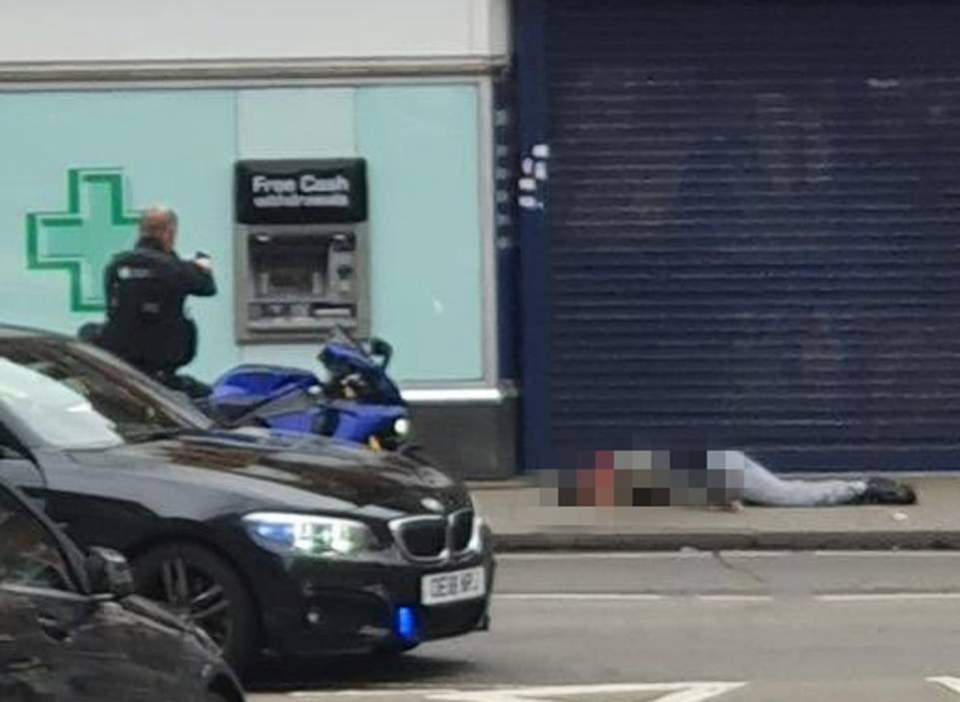 Armed police have shot dead a suspected terrorist feared to be wearing a suicide vest after at least two people were stabbed during a machete rampage on a busy south London high street – three months after two were killed in London Bridge horror.

Officers raced to the scene outside a supermarket on High Road in Streatham at around 2pm today following reports of gunfire.

Photos from the scene show a lifeless body face down on the pavement with what have been described as ‘silver canisters’ strapped to his chest with a large knife is lying beside him.

In one video, police toting machine guns and masked undercover officers are seen approaching the suspect’s body before rapidly moving away from the area.

Scotland Yard declared the broad daylight carnage as a terror-related incident around an hour after first reports from the scene. The area remains on emergency police shutdown.

The incident comes just three months after the London Bridge attack where Usman Khan was shot dead by armed police after he killed two people and injured three others while wearing a fake suicide vest.

Metropolitan Police issued an initial statement that said: ‘A man has been shot by armed officers in #Streatham.

‘At this stage it is believed a number of people have been stabbed.

‘The circumstances are being assessed; the incident has been declared as terrorist-related.’

They have since released an update that read: ‘We believe there are two injured victims.

‘We await updates on their conditions. The scene has been fully contained.’

One officer was filmed telling pedestrians that the suspect was wearing a possible suicide vest before directing them away from the scene.

Gulled Bulhan, a 19-year-old student from Streatham, claimed to have witnessed the shooting on Streatham High Road in front of a Boots store.

He said: ‘I was crossing the road when I saw a man with a machete and silver canisters on his chest being chased by what I assume was an undercover police officer – as they were in civilian clothing.

‘The man was then shot. I think I heard three gun shots but I can’t quite remember.

‘After that I ran into the library to get to safety.

‘From the library I saw a load of ambulances and armed police officers arrive on the scene.’

Mr Bulhan said people began running into nearby stores after the incident.

‘We were all informed to stay in buildings by armed police, until we were evacuated,’ he said.

Dozens of emergency vehicles lined the area and an air ambulance landed on Tooting Bec Common a few hundred yards from the scene of the shooting.

London Ambulance Service said at the time: ‘We have a number of resources attending an incident in Streatham High Road.’

A large section of the A23 remains sealed off to traffic as buses continue to be diverted.

Prime Minister Boris Johnson has since tweeted about the attack.

He said: ‘Thank you to all emergency services responding to the incident in Streatham, which the police have now declared as terrorism-related.

‘My thoughts are with the injured and all those affected.’

Local resident Stuart Birch, 50, a bookmaker, said: ‘I was just coming back from the dentists at around 2.30pm when I saw a helicopter ambulance on the Common and a police helicopter hovering above the High Street.

‘Police have cordoned off a section of the main road either side of the White Lion. 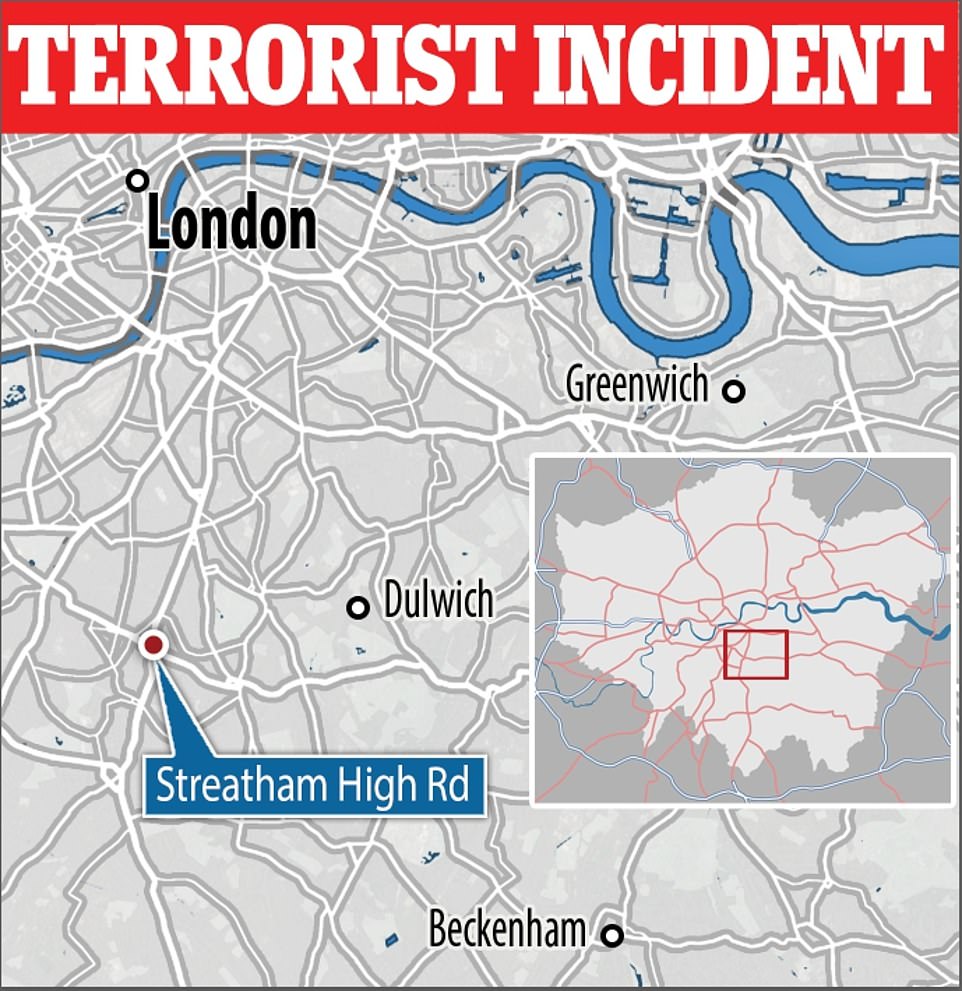 ‘I saw customers being evacuated by the police from a coffee shop near the pub.

‘Then an ambulance turned up outside the pub with horns blaring and the blue lights flashing.’

Mayor of London, Sadiq Khan, also wrote a statement which read: ‘A man has been shot dead by armed police in Streatham following an incident that is being treated as terrorism-related.

‘A number of people are believed to have been stabbed.

‘I am in close contact with the Met Commissioner and local representatives and wanted to thank our police, security and emergency services staff for their swift and courageous response.

‘They truly are the best of us.

‘Terrorists seek to divide us and to destroy our way of life – here in London we will never let them succeed.’

‘Huge thanks to our emergency services for everything they do to keep us safe.

And Home Secretary Priti Patel wrote: ‘I am being kept updated by @metpoliceuk on this afternoon’s incident in Streatham, which has been declared terrorist-related.

‘My first thoughts are with the victims, our brave police and emergency services and their families.”

Jack Odell, 28, from Streatham told MailOnline: ‘Police came and knocked on the door and told us to evacuate.

‘They just told us to move away from the area. I only saw what was pictured in my tweet of the junction.’

Mr Odell said officers did not say when he could return to his property. 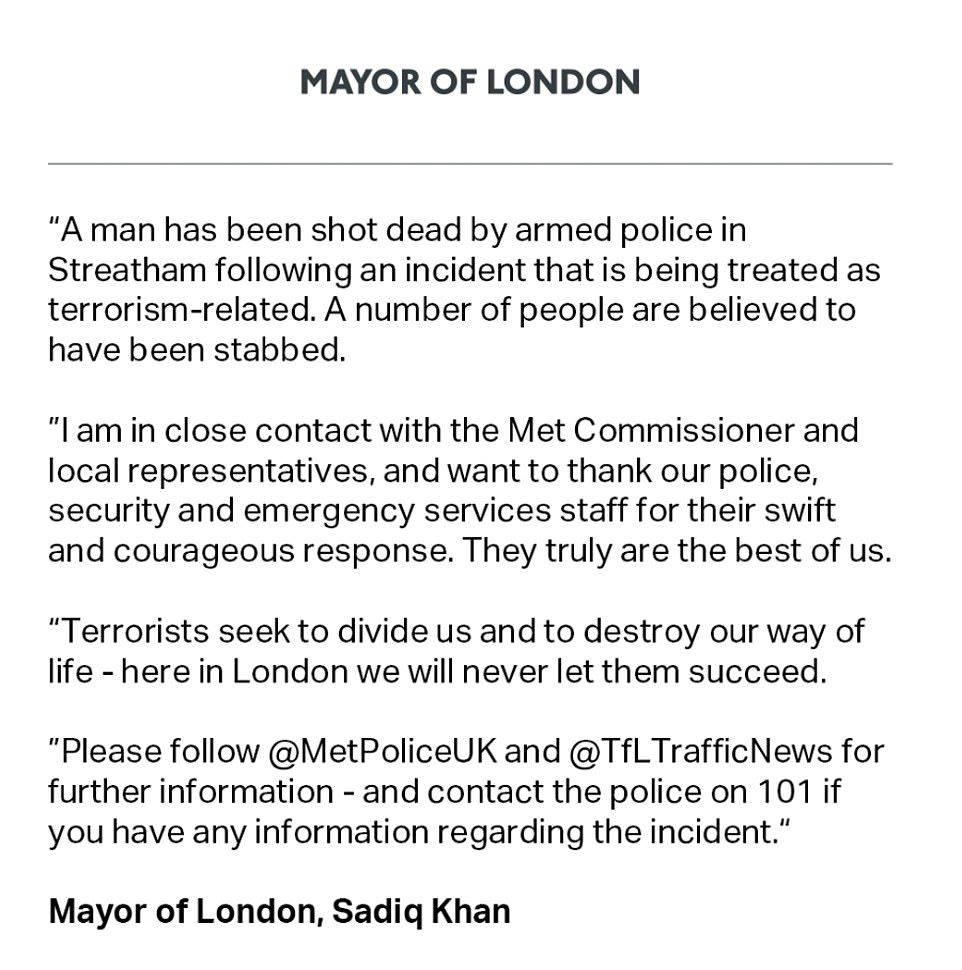 Richard Mustonen-Smith, 59, a response pastor for Ascension Trust, has lived in the area all his life.

He said: ‘I’m shocked it’s happened in Streatham. I’ve been here all my life. We’re always getting accidents down here but not this.

‘My grandson was in the Odeon and they got told to go out the back because there was a bomb. They got them to go out of the back of the cinema. They were there to watch a film.

‘When it’s a member of your family so close to you you don’t expect it. You’re always worried about your family being on the streets but this is even worse.

‘I heard two people got stabbed and apparently one man was shouting Allahu Akbar but people thought he was just a crazy man, so he got away. Apparently he had two rucksacks.’

A 33-year-old woman who lives near the scene also MailOnline how she was locked in a nearby Odeon for 20 minutes after the attack, before being rushed out a fire exit round the back.

She said officers came in and ordered them to stand well away from the windows.

She continued: ‘I heard it and just thought it was a car backfiring. Everyone did.

‘I ran into the Odeon just down the road. There were quite a few people in there. Only a few ran inside to start with.’

She said staff shut the doors. ‘Everyone just thought it was a car.’

She said another woman locked in the cinema, who had been on the way to Poundland, witnessed the shooting and was shaking with fear.

‘She thought it was a gang shooting because the two men were dressed all in black.

‘She was really shaking, she was quite distressed and was panicking and all over the place.’

The woman ran upstairs in the cinema before people were let out the back.

She said she sprinted home as police cars ‘zoomed around the area and helicopters circled above’.

She had to take a scenic route back home due to the main road being sealed off.

Rector Anna Norman-Walker, who works at St Leonard’s Church in Streatham, said: ‘Situated in the #Streatham Rectory with police tape both sides of us… prayers for our wonderful police who are doing such a remarkable job in a frightening situation.’

One user wrote: ‘What the hell is going on in Streatham?!? Helicopters circling above and sirens outside. Twitter saying a man has been shot dead. ‘It’s a Sunday afternoon and families are everywhere. Very scary.’

‘I don’t know but I think like I heard 3 gun shot in Streatham.’

Emma Taylor, from Streatham Hill, told Sun Online: ‘I was walking up the high street after going for brunch with some friends and we saw a woman screaming outside a small hardware shop next to Iceland.’

She said the distressed woman, who owns a hardware shop, shouted ‘he’s just grabbed a knife from my shop and stabbed a lady.’

The 31-year-old said the woman was just five yards in front her being treated by paramedics.

Ms Taylor described how there were armed police everywhere and said the woman being treated was in ‘pure shock’. 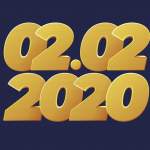 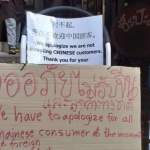