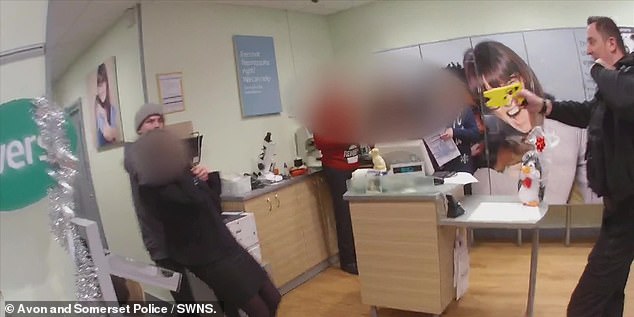 Terrifying moment a burglary suspect takes a Specsavers worker hostage by putting a knife to her throat, in a bid to escape police trying to arrest him.

James Tallon, 28, who was wanted in connection with a burglary, grabbed the horrified woman and put the blade to her neck, using her as a shield against police.

The incident took place at Specsavers in Frome in Somerset on December 14 last year.

Mr Tallon of no fixed address, has been jailed for false imprisonment, threats to kill a police officer, affray, possession of a bladed article and assault by beating.

Mr Tallon was being chased by police in connection to a burglary when he entered the Specsavers store.

He can be seen taking hold of the woman, putting a knife to her neck and backing off towards the fire escape.

Meanwhile two Taser-wielding police officers are trying to stop him as one of them can be heard shouting ‘Jamie put it down now’.

Mr Tallon eventually evades police, escaping through the fire exit and although he was tackled down by a security guardy shortly after, he managed to escape.

He then tried to hijack a car with two children inside before disappearing.

He was eventually found and arrested on December 16 and has now been jailed for six years.

A statement from Avon and Somerset Police said: ‘On 14 December last year in Specsavers in Frome he grabbed a woman from behind and threatened her with a knife when officers came into the store.

‘Using the woman as a shield, he managed to flee via a fire escape as officers deployed Tasers to no effect.

‘Shortly after, the 28-year-old was tackled to the ground by a member of security staff and a struggle ensued. Police officers deployed PAVA spray but Tallon managed to run off.

‘He then tried to hijack a car containing two young children, demanding their mother get out the vehicle.

The woman’s partner, who was in the passenger seat at the time, intervened and Tallon once again fled.

‘Concerted efforts were made by officers throughout the night and following day to arrest Tallon and he was eventually detained on 16 December.

‘An officer recognised him driving a vehicle and moved his police car to block it – resulting in him running off once more. He again resisted arrest, violently struggling with the officer before a colleague came to his assistance.

‘Following a trial at Taunton Crown Court last week he was convicted of false imprisonment, threats to kill a police officer, affray, possession of a bladed article and assault by beating.

‘He was sentenced to six years in prison with an extended four years on license.’ 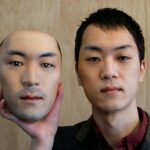