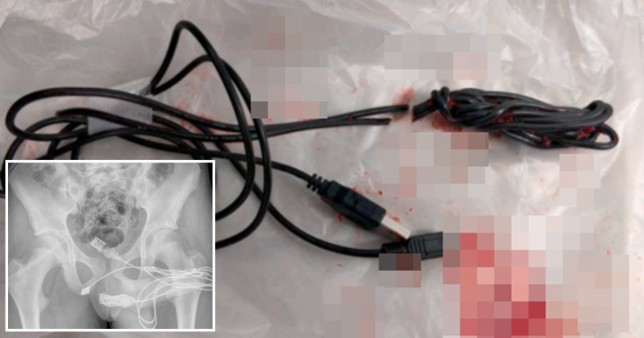 A sexual experiment gone wrong landed a teenager in hospital needing complicated surgery to extract a knotted USB cable from his penis.

When his mum was out of the room, the boy, whose name was not revealed, confessed to doctors that he inserted the cable to ‘measure the length of his penis’ out of ‘sexual curiosity’.

But instead of using a ruler, he inserted the already-knotted cable, which got stuck, with both ends left hanging out of his member.

The 15-year-old, from London, made several attempts to remove it himself but this resulted in him urinating a large amount of blood.

He was rushed to A&E where staff also tried – but failed – to pull out the cable using special tools due to the position of the knot, doctors detailed in the journal Urology Case Reports.

In an effort to remove the cable, surgeons cut lengthways into his bulbospongiosus muscle, an area between the genitals and the anus.

Medics from University College Hospital London managed to extract the knot through the incision and then cut it free from the rest of the cable.

Once the knot was removed, the remaining two pieces of the cable were pulled out the opening of his penis.

There were no complications in his recovery and he was discharged from hospital the next day.

Although cases of ‘sounding’ – the dangerous sex practice becoming popular with men, where they insert objects into their penises – are rare, it can have a number of side effects and can permanently damage their member.

Metro.co.uk has reported on two cases in the last few years – one of a ‘curious’ 13-year-old boy and another of a ‘regretful’ man, both of whom lived in China and used a USB cable.

What are the risks of ‘sounding’?

Side effects such as Urethral Strictures, described as ‘a kink in a hose’, block productive urine flows leading to leaking, embarrassing lack of control over the bladder and incontinence, not to mention infection in this very sensitive organ.

Incontinence can also be developed as loosening of damaging this soft tissue can led to a loss of bladder control.

In order to return the penis to its previous abilities, alleviate pain and pressure, expert andrologists investigate the penis and the Urethral tube and usually diagnose surgical correction or even implants to help rebuild this sensitive area.

Emerging into the mainstream, the practice sees men insert specially designed items made from metal or glass, into the opening in the end of their penis.

The aim of this practice is to enhance their sexual pleasure and even encourage exploration of the penis by their partner.

Doctors at International Andrology, specialising in the treatment of conditions such as Erectile Dysfunction, Peyronie’s Disease and size issues have seen a dramatic increase in the number of men presenting Urethral complaints, issues and infections in line with the rise in this sexual practice.

Health experts urge men interested in this activity should first understand the issues with introducing objects into this passageway, purchase the items involved from reputable businesses and embrace clean practices such as cleaning items regularly and using lubrications specially designed for sensitive areas. 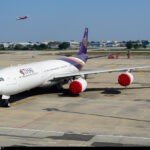 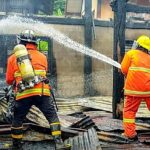