Police said Witthaya Charoenphan, 42, was shot once to his body and again to his left arm, allegedly by Suthep Chanthiam, 35, a suspect in a drug case.

Witthaya was rushed to the Chularat 3 Hospital.

Police said they were driving a car as they chased Suthep on his motorcycle, and managed to block him in near the taxi stand.

Suthep then ran to the stand and allegedly shot Witthaya to steal his motorcycle.

He later crashed with another vehicle, allowing police to arrest him. Police said they found a .38 revolver on the suspect.

Police learned that Suthep was also wanted on an earlier robbery charge, in which he allegedly stole a gold necklace worth Bt100,000 from a man in Ban Saothong. 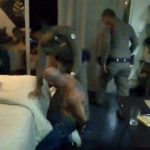