Home » Tak man kills estranged wife, turns gun on himself after failing to patch things up

A man fatally shot his estranged wife and then turned the gun on himself at her house in Tak’s Phop Phra district Tuesday morning, after she had reportedly refused to get back together with him, police said.

Phop Phra police station was alerted to the double-shooting incident at a house, which is also a grocery store, in Tambon Phop Phra at 8 am.

Officers rushed to the scene to find the body of Anurak (surname withheld), 33, with gunshot wounds to the chest.

A sawn-off shotgun was found near his body.

The owner of the house, Nucharee (surname withheld), in her 20’s, was rushed to the district hospital but died en route.

Nucharee’s father, Somchai, 62, told police that Anurak was Nucharee’s husband, but she had asked him to move out about a month ago because he liked to get drunk and would then often beat her up.

He said that Anurak had come to visit Nucharee in the morning, asking her to reunite with him.

However, she had refused, which angered him and he shot her once before turning the gun on himself, Somchai added. 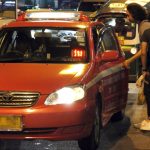 ‘Koy’ and ‘May’ acknowledge charges in Magic Skin case