A video has been posted online that is basically the most badass thing you are going to see today.

It shows a Taekwondo team from Japan doing all sorts of frankly ridiculous flicks, tricks, kicks and the like.

It’s amazing. They are throwing each other up in the air, delivering huge spinning kicks, and doing all manner of physics-defying shit at breakneck speed.

It will not only keep you amazed, but also more than likely make you feel bad about what you’ve achieved with your day so far.

I mean, sitting at a desk is all well and good, but we could all have channelled our energies into learning to perform ridiculous feats of skill and strength, beating the living hell out of wooden blocks held at improbably high heights by other physical specimens such as ourselves.

Still, that does sound like an awful lot of work.

Most people would feel out of breath just watching these guys, let alone actually doing it.

Anyway, the footage was shared on a Facebook page called Korean DramAmazing and has since been viewed millions of times, for obvious reasons.

These guys make it look easy, but surely if you want to be the very best you need a Liam Neeson style set of skills.

It looks as if all you need to get through in the world of professional Taekwondo performance is hard work, determination, bravery, patience, skill and a hell of a lot of practise.

No thanks, you’re alright mate. I’ll just watch these guys do it. It’s probably dangerous anyway. That, and I simply haven’t got the amount of wooden boards to get rid of.

The folks behind this amazing demonstration are the Kukkiwon Taekwondo Demonstration Team.

They were performing as part of the opening ceremony for the World Taekwondo Hanmadang, which – after a cursory Google search – appears to be a festival at which Taekwondo enthusiasts gather to show off their skills.

If you didn’t already know, Taekwondo is a Korean martial art that is famous for its high-flying kicks and dramatic fighting moves.

It’s an Olympic Sport, and – it may surprise you to learn – the UK are quite good at it.

Since they started taking part in 2000 at the Sydney Olympics, Britain has won three medals, including one gold, won by Jade Jones at the home games in London back in 2012.

Not sure if all of the combined forces of British Taekwondo could take these guys on. They’re making those wooden boards look silly. 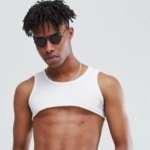 ASOS Is Selling A Crop Top For Men