A Swiss man was arrested at a Chon Buri resort early on Saturday as requested by the Swiss government for having allegedly cheated an insurance firm in his motherland of 600,000 francs or about Bt20 million.

Police from Crime Suppression Division arrested Zumbach Christoph, 68, at the Ban Sareh Lake and Resort under an arrest warrant issued by the Criminal Court on July 17.

The Thai Foreign Ministry sought the arrest warrant at the request of the Embassy of Switzerland, which wanted the man extradited to face fraud charges.

The Swiss embassy told the Foreign Ministry that the man is a former driving instructor in his homeland. He is alleged to have faked an accident in order to fraudulently obtain compensation worth 600,000 francs from an insurance company.

The firm later had doubts about the claim, launched an investigation and found that it had been deceived.

Police said Christoph had been staying in Sattahip district in Chon Buri since April 15. 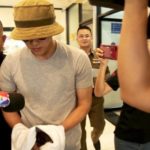