A suspected Muslim insurgent was killed during a gunfight with Army troops in Pattani’s Kapor district on Wednesday morning.

Troops from the Pattani Taskforce surrounded a house in Moo 3 village in Tambon Karubee after they learned that the suspect, Sulaiman Muhammad, was hiding there. Troops claimed that the suspect shot at them first with a .30 calibre rifle, so they returned fire. The suspect, who was wanted on an arrest warrant issued by the Narathiwat court, was later found dead in the house. NT – EP 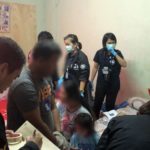