The Public Health Ministry has warned people not to eat or sell meat from animals that died of illness or from unknown causes, as they may contain anthrax, after a man was admitted to a hospital in Mae Sot district under suspicion that he had contracted Anthrax after eating meat from a dead goat from Myanmar.

The patient, a Thai man whose identity was withheld, was admitted to the Mae Sot district hospital after he was suspected to having contracting Anthrax, a highly dangerous communicable disease which has not been detected in Thailand for the past decade.

Public health permanent secretary Dr Jesada Chokedamrongsuk said that specimens taken from the patient had been sent to the Medical Science Centre for examination to determine the disease.

While the ministry is awaiting the result of laboratorial tests, he said he had ordered all provincial health officials to coordinate with livestock officials to watch out for diseases which could be transmitted from animals to humans with special focus on areas where such diseases used to be found.

People were also warned not to eat or sell meat from animals died of diseases of from unknown causes as they might be infected with Anthrax, said Dr Jesada.

He advised people who found grass-grazing animals such as cattle, goat and sheep which were dead from illness or from unknown causes not to touch the dead animals but to immediately report to health or livestock officials.

If it is necessary for them to touch the animals, they must wear gloves and wash their hands with soap after coming in contact with the animals, he said, adding that if they develop fever or muscle pains, they should immediately see a doctor within 48 hours.

Anthrax affects mainly livestock and wild games and it can be transmitted to other animals and men through skin contact, inhalation, breathing and eating of their meat.

Anyone planning to travel to Bali needs to register first 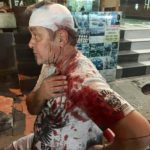