A police senior sergeant-major in Surat Thani shot himself to death early Monday after shooting and severely injuring his mother-in-law.

Khun Thale police station rushed to the scene after being alerted about a violent incident at a house in Moo 9 village in Tambon Khun Thale, in the province’s Mueang district.

When they entered the two-storey shop-house, officers heard two gunshots and found the body of Pol Senior Sgt-Major Thanan Meesai, 50, in his bedroom on the second floor.

He had a gunshot wound to the right temple, and a 9mm pistol was found near his body.

His mother-in-law, Ratree Lomlim, 70, had suffered a gunshot wound to her hip and was found lying severely injured in another bedroom.

Thanan’s wife, Wanida, told police that earlier in the night she had quarrelled with her husband and left their bedroom to sleep in another bedroom with her mother.

She said Thanan had then become angry and used his pistol to shoot at the door lock, but she jumped from the window and escaped, resulting in her husband becoming even further infuriated and shooting Ratree.

Wanida had once divorced Thanan following a series of quarrels, but later reunited with him after being encouraged to do so by their parents, she told police. 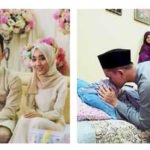 Bride dies within a day of marriage