A section of stairs from the Eiffel Tower in Paris sold for almost 170,000 euros on Tuesday, auctioneers announced, around three times the pre-sale estimate.

More than two dozen wrought-iron steps from the original spiral structure, from between the second and third floors of the Paris landmark, were sold to a Middle East collector for 169,000 euros ($190,000) after a bidding-war in the French capital.

Auction house Artcurial originally estimated the sale price to be between 40,000 and 60,000 euros.The stairs, which stand 4.3 metres high (13 foot) and were part of a private Canadian collection, date from 1889 when the legendary French engineer Gustave Eiffel built the 324-metre edifice as the centrepiece of the Paris Universal Exhibition.

It soon became the most iconic feature on the Paris skyline and is France’s most visited monument despite suffering calls for its demolition in the years after the exhibition.

It is still the country’s third tallest structure, and was the highest building in the world for 41 years until the construction of the Chrysler Building in New York in 1930.

The stairs were removed from the tower in 1983 to make way for a lift and cut into 24 sections, ranging from two to nine metres high.Several were bought by museums or ended up as historic installations in prestigious sites around the world. 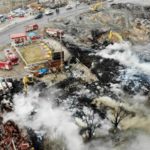