The boat Serenata has been recovered from the waters to the south-west of Phuket and is now at the Boat Lagoon dry dock.

The speedboat has been recovered as part of the investigation into the two boats that sank on July 5, resulting in the death of 47 Chinese tourists. The Serenata sank but all its passengers survived.

The engine area hatch was missing and 10 soldiers guarded the boat, which will be used as evidence in court. 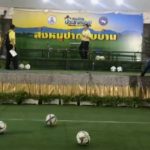