South Korea’s sex theme park. Say ‘theme park’ and you think: Alton Towers or Thorpe Park; family fun and fast rides and fried food and trying not to throw up before you hit the rides again.

It’s a little different over on the South Korean island of Jeju.

Now in its 14th year, having opened to the public in 2004, Jeju Loveland is something of an anomaly in the conservative landscape of South Korea.

Sex there is taboo, with the views of the older generation at odds with the modern thinking of the younger population.

Sexual education exists but is limited, the production of pornography is illegal and while homosexuality is not outlawed, the first gay marriage was declared not legally binding. 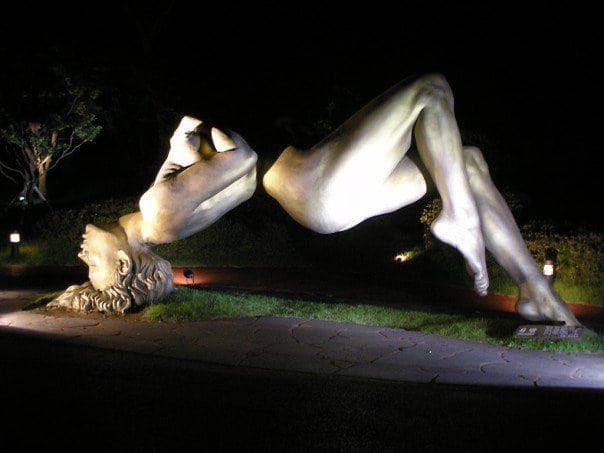 The island of Jeju has always bucked the mainland trend.

Following the end of the Korean war, with overseas travel still restricted, Jeju emerged as a popular destination for honeymooning couples.

They were attracted by the warm climate, and possibly the hotel staff who, as legend has it, devised evening entertainment to get new couples in the mood.

In 2002, graduates of Seoul’s Hongik University began to create scandalous sculptures, displaying them across an area covering roughly 14,000 square meters, which is the size of two football pitches.

Some of the sculptures are as saucy as you might expect: a walkway of masked couples that is distinctly 50 Shades; women depicted in physics-defying positions and a small diorama of a man covertly peeking at three women on the loo.

Most are strictly hands-off, although a few – including a hand-crank that makes a mechanical couple get filthy – are designed to encourage participation.

The most surprising thing about Jeju Loveland, however, is not its triple-X content but just how tasteful it all is.

Each sculpture is a work of art and most are strikingly beautiful. 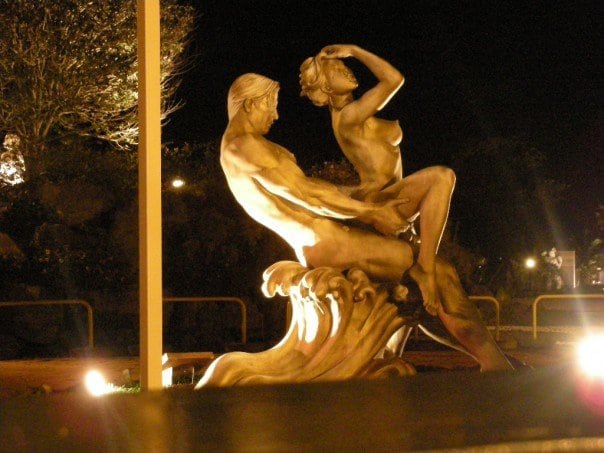 A fornicating Japanese couple, carved in white stone, is classic and sensual.

A small sculpture of two pigs kissing is tender, heart-warming even, and a timely reminder that sex involves intimacy as well as animalistic lust.

Yet for all its sentimentality, Jeju Loveland is, at its core, a tourist attraction and there is plenty of salaciousness to keep visitors entertained.

Take the drinking fountains, which formed by a tableau of four, naked men – guess where the water spurts emerge.

The gift shop is a treasure trove of delightfully smutty trinkets and the cafe serves up phallic shaped bread.

It’s what’s inside that counts 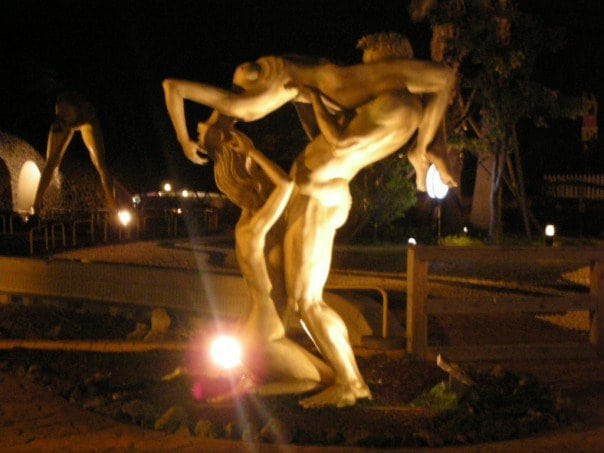 ‘We visited Jeju island to get away from the hustle and bustle of city life,’ she says.

‘We heard that it was famous for its beautiful scenery and waterfalls and were not expecting to visit a park like Jeju Loveland but it was actually quite refreshing.

‘It was relatively quiet when we went: there were about 10 small groups of visitors walking around, taking pictures and it took us about an hour and a half to go around.’

For Hui Ying, the highlight is the large, bronze statue at that entrance, depicting a woman on her back, visibly in the throes of passion.‘It’s called ‘Desire’ and it was really well done.

A good art piece should capture a feeling, the sense of being in the moment, and I think that statue was quite reflective of that, literally and figuratively.

‘The kudos has to go to the artists. The observation of the human body was spot-on and so were the intricate details put into their sculptures.’

And while Hui Ying is aware of South Korea’s moderate attitude to sex, she believes the park represents ‘progress.’

‘Sex is a part of life. If done well, tastefully, it deserves to be celebrated and Jeju is indicative of openness in society, which is something that should be enjoyed with lovers and appreciated with friends.’

There’s something for (almost) everyone 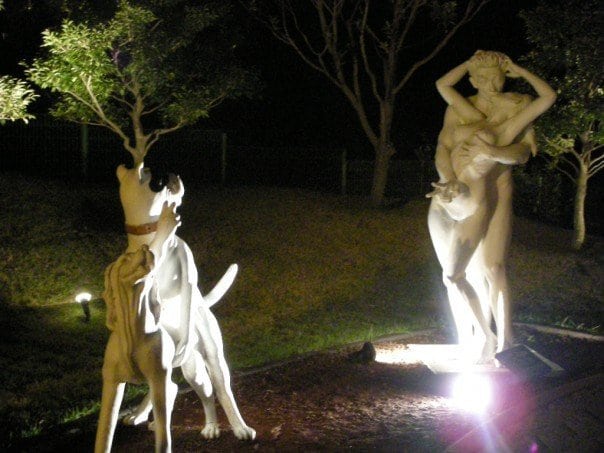 Once a haven for honeymooning lovebirds, today Jeju Loveland welcomes visitors of all varieties, which is fine if you’re with your mates, less so if you’re with family.

Here’s how to enjoy this sex-themed theme park, whomever you go with.

If you’re going with your children… make sure they’re of age. Jeju Loveland is strictly 18 and over (drop the little ones off at the Manga-themed play area).

Save your blushes and head for the most soft-core sculptures, such as the couple having a nice, friendly cuddle, or the woman in a pink cardie sitting alone on a bench.

If you’re going with your partner… Start with the giant kissing couple, which is a prime Instagram opportunity. 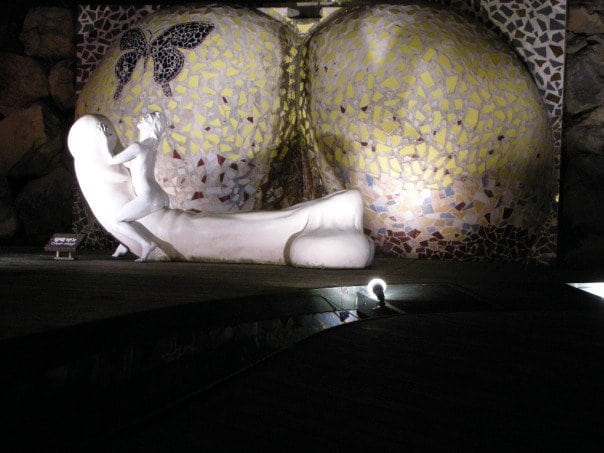 To get you in the mood, there is also a red car engineered to bounce up and down and emit the noise of a couple making love, which is oddly sensual.

Avoid the masked couples in heroic, gymnastic poses. Guaranteed to make your own sex life seem more vanilla than a tub of Haagen Dazs.

If you’re going with your mates… Don’t miss the Marilyn Monroe Eagle statue, which shows the head of an eagle diving into Monroe’s crotch. Surreal, yet weirdly beautiful.

There’s also a plinth dedicated to two eager dogs that is guaranteed to make you smile.

Avoid the man with a proud morning glory. The photo opportunities are likely to get you thrown out.

If you’re going on your own… There are plenty of statues of men and women going solo if the endless copulating couples prove too much.

Protein discovered to be main cause of kidney, heart failure