Demi-Leigh Nel-Peters, who recently earned a business management degree, was crowned Sunday during the event that took place at The AXIS theater at Planet Hollywood casino-resort on the Las Vegas Strip.

Ninety-two women from around the world participated in the decades-old competition. This year’s edition had the most contestants ever.

The 22-year-old Nel-Peters has earned a yearlong salary, a luxury apartment in New York City for the duration of her reign and more prizes.

Last year, Iris Mittenaere from France was crowned when the pageant took place in the Philippines.  source: Khaosod 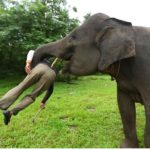