Home » Find our son’s killer or else, say parents

The parents of a 24-year-old college student, who was shot dead at his parents’ food stall in Bangkok, have urged police to make an arrest within 30 days or they will file a complaint at the Dhamrongtham Centre.

Kamonwich Suwanthat, a fourth-year student at Rajamangala University of Technology Tawan-ok Uthenthawai Campus, was shot dead on October 12 while helping the family sell food at the entrance to Soi Nawamin 57.

His father Narudom Suwanthat, said on Monday he also believed that Kamonwich’s murder might stem from the fact that he was a friend of another murder victim, Thanit Kanlahasunthorn, 23.

Narudom has also asked for police protection for his son’s schoolmates at the temple where the son’s funeral was held.

Thanit was fatally stabbed to death on Prachasongkroh Road in Bangkok’s Din Daeng district on April 15, 2016.

In July this year, his father Supachai Kanlahasunthorn, 52, jumped to his death from the eighth floor of the Criminal Court building after the court announced it would give the benefit of the doubt to the case’s sole defendant Nattapong Ngern-khiri and acquit Nattapong of murder.

He said police had not rule out any motives, although they were giving more weight to the fact there was a dispute among rival college students. They were especially focusing on the fact that Kamonwich might be a witness in the Thanit murder case and was therefore killed to hush him up. 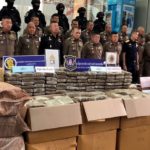 Man sought in Chiang Mai after granny dies from injuries