Traffic collisions are expected to spike from April 11-17 as people travel back to their hometowns for the Songkran holiday.

Songkran has gained notoriety for road accidents as so many people are under the influence of alcohol or illegal drugs and many choose to speed.

On Monday, 26 people were killed, 238 were injured from 237 road accidents, the Department of Disaster Prevention and Mitigation (DDPM) announced.

“Most of the deaths were motorcyclists who were not wearing their helmets,” said Boontham Lertsukekasem, the Director-General of the DDPM.

Last year, 277 people were killed during this week, and 2,357 were injured from more than 2,300 traffic accidents during the Songkran holiday. The number of accidents went down 30 per cent from the same period in 2019 due to the reduction in travelling from the Covid-19 outbreak.

Thai authorities have banned Songkran festivities with large gatherings for the last two years due to the pandemic.

The Office of the Chief Justice Region 6 said in a statement over the weekend that they expect more traffic collisions in its region this year when compared to last year, especially from drunk driving as there are less Covid restriction measures.

Apart from the accidents, 459 drivers were arrested for driving under the influence of alcohol or illegal drugs. Reckless drivers were also arrested at checkpoints around the country on Monday, said the Department of Probation.

Out of the 459 arrests, 328 were drunk drivers, 123 were under the influence of drugs, and eight cases were reckless driving.

The top three provinces where drunk drivers were found include Nonthaburi with 55 cases, followed by 47 in Ubon Ratchathani and 44 in Phra Nakhon Si Ayutthaya.

Analysts expect this year to be even worse than last as Covid restriction measures continue to ease. US sanctions cartel leader with links to Tyson Fury 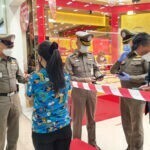